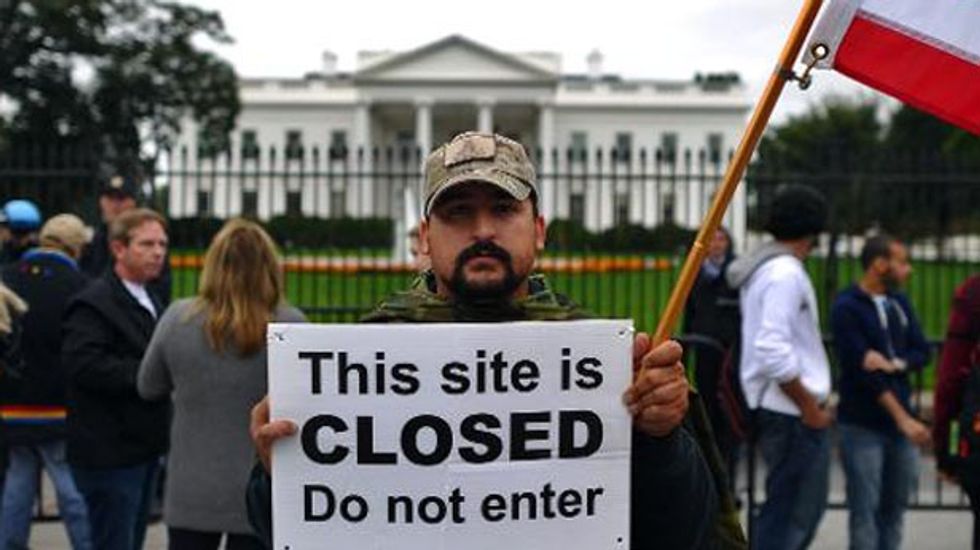 Rival Republican and Democratic Senate leaders Monday said they were optimistic they could agree a deal to stave off a debt default that would shred US credibility and rock the global economy.

Signs of hope emerged three days before a deadline to raise the US government's borrowing limit and with a partial government shutdown on the cusp of entering its third week.

After several failed attempts to end the impasse, veteran political prize fighters Senate Majority leader Harry Reid and his Republican opposite number Mitch McConnell conducted low key talks aimed at saving the day, over the weekend and into Monday.

"I'm very optimistic we will reach an agreement that's reasonable in nature this week to reopen the government, pay the nation's bills and begin long-term negotiations to put our country on sound fiscal footing," Reid said.

McConnell added: "I share his optimism that we are going to get a result that will be acceptable to both sides."

Their comments were the most concrete sign yet that Republicans and Democrats, in the Senate at least -- want to end the damaging political crisis.

Should the Democratic-led Senate coalesce on a deal, the question would then become could Republican House Speaker John Boehner secure sufficient support from his restive conservative coalition in the House to send it to Obama's desk?

An official said the talks were put off to "allow leaders in the Senate time to continue making important progress towards a solution that raises the debt limit and reopens the government."

The sudden optimism contrasted with Obama's terse tone of a few hours earlier, when he lambasted Republicans and warned of the consequences if a deal was not soon reached.

"If Republicans aren't willing to set aside their partisan concerns in order to do what's right for the country, we stand a good chance of defaulting and defaulting could have a potentially... devastating affect on our economy," Obama said.

During a visit to an anti-poverty charity in Washington, Obama said he would tell the leaders to "open the government and urge them to make sure that the United States government is paying its bills."

If Congress does not raise the $16.7 trillion debt ceiling by Thursday, the US government will begin to run out of money and could start defaulting on its obligations.

The Politico news organization however reported Monday, that Reid had offered a compromise plan to McConnell.

The initiative would raise the debt ceiling for six to nine months and the government would be reopened until mid-to-late December.

The proposal would launch long-term budget talks between Democrats and Republicans, and could include a delay of a medical device tax used to help pay for Obama's health care reform law.

Signs of hopes cheered investors, after uncertainty on Wall Street. Increasing concern over the fiscal showdown pulled the Dow Jones Industrial Average down early on, but amid talk of negotiations on Capitol Hill, stocks rose a quarter percent by mid afternoon.

Republican Senator Roger Wicker told MSNBC he was hopeful of seeing "something meaningful by the end of the day" from the Senate talks.

"There are sweet spots that Republicans and Democrats agree on," he said.

Around the world, however, signs of alarm were mounting.

China and Japan -- which between them hold more than $2.4 trillion of US debt -- have urged Washington to get its house in order.

"The United States is the largest economy in the world and we hope that it can show its responsibility," Hua told reporters.

And Bank of France Governor Christian Noyer warned of dire consequences if there was no solution.

A default would be "a thunderbolt on the financial markets" that would set off "extremely violent and profound turbulence worldwide," he told the daily Le Figaro.

In Asia, markets in Sydney, Seoul and Singapore were down in part over the deadlocked talks. Tokyo, Hong Kong and Jakarta were closed for public holidays.

US Treasury Secretary Jacob Lew told the International Monetary Fund last week that Washington understood its reputation as a safe harbor was at risk.