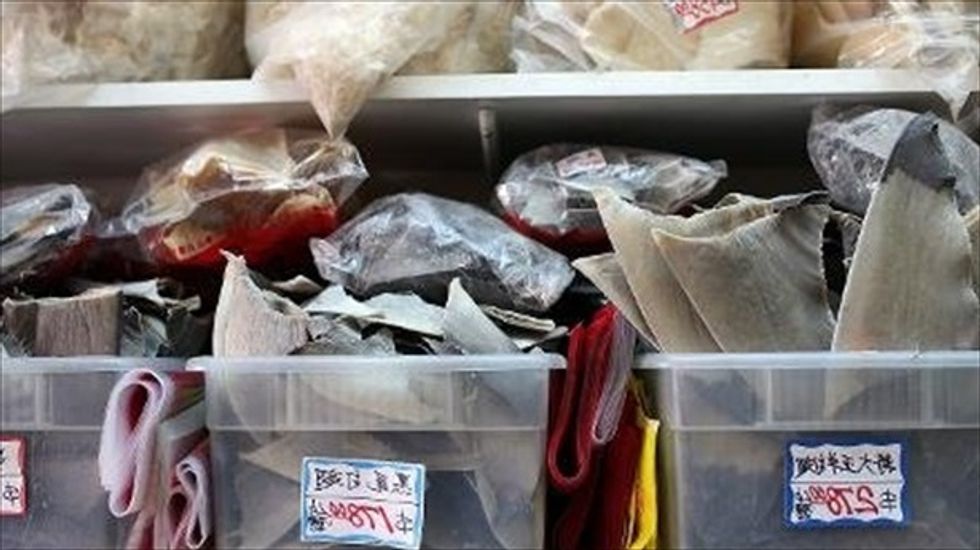 Trays filled with shark fins are displayed at a store in Chinatown in San Francisco, California. [AFP]

Peru has dramatically increased its sales of shark fins to Asia, triggering the slaughter of about 15,000 dolphins a year used as bait, officials said Friday.

Shark fin is viewed by many Asians as a delicacy and is often served as a soup at expensive Chinese banquets.

Most of Peru's shark fin exports, which jumped 10 percent in recent years, go to Japan, Hong Kong, Singapore and other Asian Nations, the Production Ministry said.

Although shark fin is authorized when regulated, some fishermen are engaging in "criminal activity" by fishing illegally, and must be punished, Fisheries Deputy Minister Paul Phompiu told reporters.

"We are outraged by this situation. Peru condemns the illegal fishing of dolphins and sharks because they are a protected species," he said.

The Mundo Azul protectionist group said this week that 15,000 dolphins are slaughtered each year in Peru and their meat is used as bait to catch sharks.

More than 545 artisanal vessels are equipped to perform this type of fishing along the Peruvian coast, making at least half a dozen excursions a year and killing up to six dolphins each time, it added.

Only 72 shark fishing boats are currently registered with authorities, but there are not official figures on illegal boats.

Phompiu said that stopping the slaughter of dolphins requires going to the root of the problem and controlling the commercialization of shark fins, which is considered an aphrodisiac.

Among the measures to be adopted are the temporary restriction of shark fishing and commercialization, seen as the main incentives for overfishing of dolphins.

And in "extreme cases," Peru will issue a ban on fishing dolphins and sharks, Phompiu said.

According to the action plan, the Sea Institute will identify areas where fishing occurs indiscriminately and the characteristics of the fishing fleet, along with breeding areas.

Although mackerel and squid are also used to hunt sharks, fishermen prefer to use dolphin meat, because its strong odor of blood is said to attract sharks.