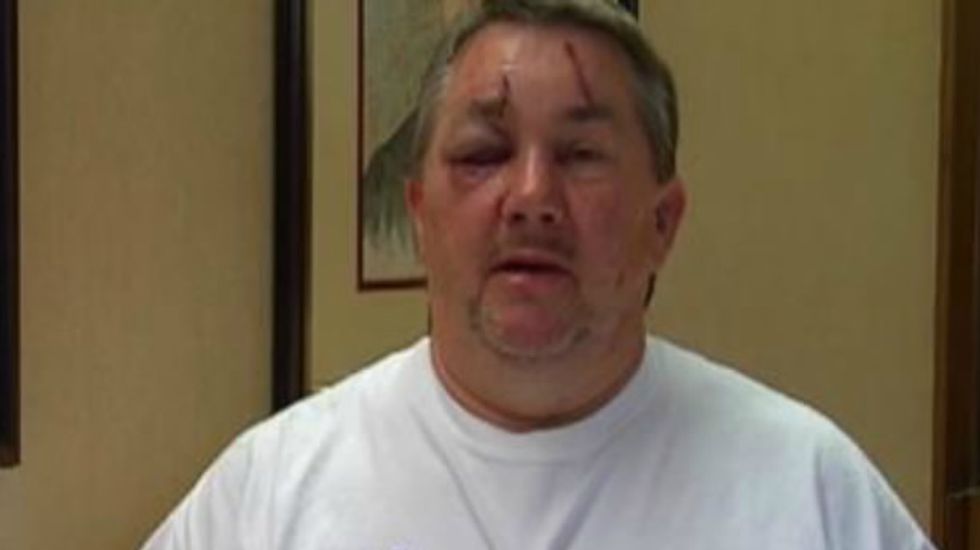 On Sunday, a self-professed "militant atheist" with a checkered criminal past attacked a pastor in a North Hampton, Ohio church.

According to Reverend Norman Hayes, he had approached the girlfriend of James Maxie and asked her if Maxie had been abusive. "I questioned his girlfriend in his presence if she felt safe," Hayes told WHIO. "He was very, very upset that I'd even suggest that he would hurt her. Then he turned around and hurt me very badly."

According to the police report, Maxie broke Rev. Hayes's nose in two places, left 3 and 6-inch lacerations across his left and right eyes, and battered his right eye until it was swollen shut in a manner doctors worry may have caused brain bleeding.

"He came from nowhere and hit me, knocked me down, and then he got on top of me and just kept hitting me over and over," Hayes said. "I really believe my life was in danger if he hadn't stopped hitting me in the face over and over."

Maxie is not unfamiliar with the justice system. He previously spent two years in jail for a felonious assault conviction, and became a convicted sex offender after have unlawful sexual contact with a minor in 2008. He was also charged, but never convicted, of four counts of animal cruelty in 2004.

In a statement Maxie wrote to police, he said he had attended church with his girlfriend that morning because he was "trying to regain his faith in God." He admits to having "asked questions about science and faith," and claims that Hayes told his girlfriend she was "going to hell for dating me."

At that point, the man whose Facebook page declares "I'm proud to be an atheist," made what he believes was "the worst mistake ever."

At Maxie's bond hearing, Judge Denise Moody granted Hayes a protection order against Maxie, who is currently detained in jail on a $51,000 bond.

Watch an interview with Hayes about the incident below.