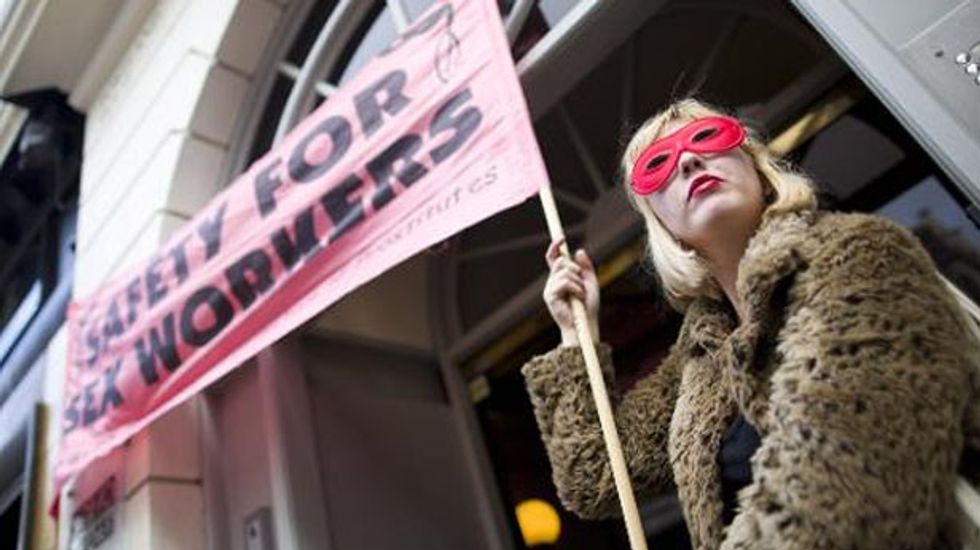 Sex workers in the legendary London district of Soho demonstrated in carnival masks and negligees on Wednesday against evictions they claim threaten their safety and the unique nature of the area.

The small but colourful group held up posters saying "No evictions -- safety first" and "I'd rather sell my body than sell my mind to a corporation" as they protested the closure of several flats used by sex workers on Tuesday night.

Hollywood actor Rupert Everett was among their supporters who gathered outside the offices of Soho Estates, the management company for the property empire built up by the late 'king of Soho' Paul Raymond.

"We represent Soho! This is what Soho looks like! It's a diverse community -- we want to keep it that way," shouted Niki Adams of the English Collective of Prostitutes (ECP), wearing a pink mini-skirt and feather boa.

John James, managing director of Soho Estates and Raymond's son-in-law, said his company was not directly responsible for closing the flats but noted that police said they were being used as brothels.

"Soho Estates has no issue with what we consider a historic use of Soho buildings. What we cannot do is flout the law," James told the protesters.

Everett, who starred in "My Best Friend's Wedding" with Julia Roberts, is currently making a documentary on prostitution and said sex workers were an integral part of Soho's character.

"I don't think they should be developed out and we should find ourselves full of a lot of tax-avoiding rich foreigners making Soho into another blob on the horizon," he told AFP.

While selling sex is not illegal in Britain, brothels -- defined as properties where more than two sex workers operate -- are prohibited, according to the ECP.

The Soho workers claim their flats are home to only one working woman and a receptionist or "maid", who deals with the money and can help out if a client turns nasty.

Paula, a 21-year-old Romanian who has been working in Soho for four years, told AFP the evictions were "not fair".

Bella Walker, a former sex worker dressed in a black negligee and red print dressing gown, said Soho was a relatively safe place to work but shutting down flats threatened that.

"Other places women often get hounded, but in Soho sex work isn't hidden, it brings money in, local shops depend on it. All of that gives women a certain level of power," she said.