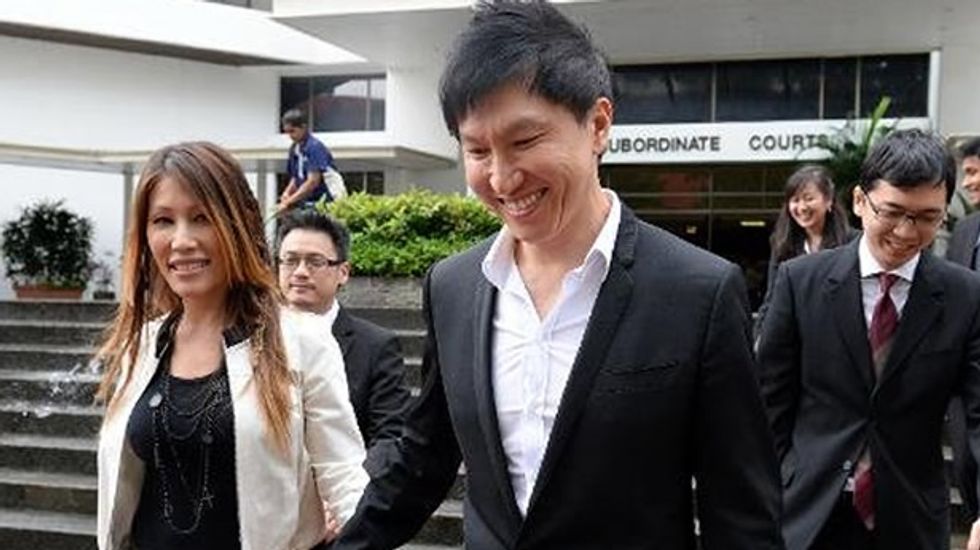 A multimillion-dollar scandal involving a Christian pastor, his singer wife and a glamorous financial executive has gripped Singapore, with allegations of fraud and tantalising glimpses into the expensive process of making a pop star.

Kong Hee, 47, the pastor and founder of the 20,000-strong City Harvest Church, is on trial alongside five other church officials for an alleged scheme to siphon off Sg$24 million ($19 million) to finance the singing career of his wife Sun Ho.

The accused allegedly misappropriated another Sg$26 million to cover up the original diversion.

Ho, 41, an established Mandarin pop singer who co-founded the evangelical megachurch with her husband in 1989, moved to Los Angeles in 2009 to launch an English-language singing career before the scandal scuttled her showbiz ambitions.

She does not face any charges herself, appearing stoically with her husband for his court appearances as her music videos continue to draw hits on video-sharing site YouTube.

The video for her song "China Wine" -- in which she dances in a nightclub alongside the rapper Wyclef Jean -- has attracted more than one million views so far.

In another video, the reggae-tinged "Mr Bill", she plays a skimpily-clad Asian wife who calls herself a geisha and sings about killing her African-American husband, played by the male supermodel Tyson Beckford.

Ho also posed for numerous pictures at exclusive events with American celebrities as part of her image-building campaign.

Evidence reportedly produced in court showed that the church had earmarked more than US$10 million as its marketing budget -- "in line with Shakira's marketing budget and less than the budget for Beyonce" -- to boost her Hollywood foray.

The Straits Times said the documents also showed more than US$1.6 million was spent on production fees for Wyclef Jean.

The church has defended Ho?s attempt to become an international music star as part of a ?crossover? campaign to spread God's message to the secular world through pop music.

But prosecutors say Kong and his subordinates engaged in a practice called "round-tripping" by channelling money allotted for a church building fund into sham bonds in church-linked companies so they could finance Ho's music career.

They falsified church accounts to make it appear the bonds were redeemed, prosecutors say. All six accused deny the charges.

The trial, which went into recess on September 20 and will resume in January, exposed complex money dealings and drew attention to the financial might of evangelical Christian churches in the largely Buddhist and Taoist city-state.

The trial also created a buzz in the mainstream press and on social media thanks to the church's photogenic former financial manager, Serina Wee, a 36-year-old mother of three whose stylish courtroom outfits have turned her into a fashion icon.

Wee faces six charges of criminal breach of trust for her role in the alleged scam, and four other charges for falsifying accounts.

Jeaney Yip, an Australia-based academic who has studied the marketing methods of fast-growing churches, said they make Christian teachings attractive by drawing on pop culture.

"Because of the religious and humanitarian element to giving, I do not think churchgoers generally question or pay attention to how the funds are managed," said Yip, a lecturer at the University of Sydney Business School.

"The issue is not in the giving; it is in the management of the funds received that deserves accountability and transparency."

City Harvest, which has 20,000 followers in Singapore and 49 affiliates in eight Asian territories, acquired a stake in one of the city-state's biggest convention centres in 2010 for Sg$310 million and holds its weekly services there.

Give and you shall receive

Terence Chong, a sociologist at the Institute of Southeast Asian Studies in Singapore, said some independent churches like City Harvest preach the "prosperity gospels" which seek to convince followers that offerings made to God through donations and voluntarism will be rewarded with spiritual and material blessings.

"In essence, the prosperity gospels appeal to the culture of self-improvement and upward social mobility in capitalist societies," Chong said, adding that the followers tend to come mostly from the "emergent middle class".

The church's website exhorts members to donate money as a "form of worship" and lists acceptable credit cards.

"As we give, we have faith that He will never shortchange us," the website says.

"He will certainly bless our lives abundantly in return, because we can never out-give God!"