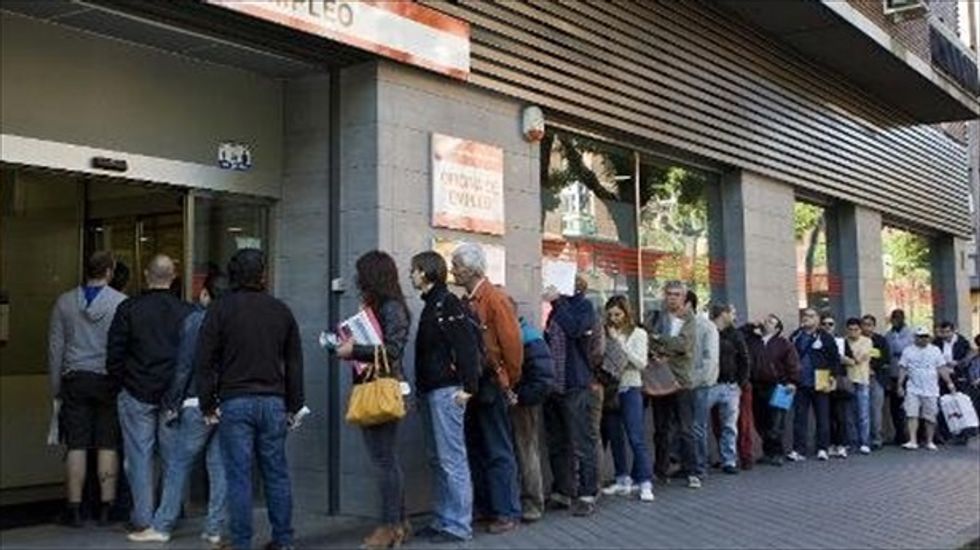 People wait in line at a government employment office in Madrid. [AFP]

After a career spent repairing trains, Francisco Marcos Gallego once thought he and his wife would end their days in comfort. Instead they are struggling to support their unemployed son and his children.

"Even if it is hard, as long as I am alive, I will pay my son's mortgage so he is not thrown out on the street," said Francisco, 80.

A retired employee of the state railway firm Renfe, he shares a two-bedroom apartment with his 82-year-old wife Maria in Vallecas, a working class neighbourhood of Madrid.

The couple must use their combined monthly pension of 1,300 euros ($1,760) to help feed their son Miguel, 49, who has been out of full time work since 2009, and the teenaged children who still live with him.

Still suffering the effects of the economic slump triggered by the collapse of a property boom in 2008, more and more Spanish families are relying on their retired parents to survive as their unemployment checks run out and mortgage bills pile up.

Just over one in four Spanish households, 27 percent, survive thanks to the revenues of retired family members, according to Spain's Democratic Union of Pensioners and Retirees, a lobby group.

"I only have my parents. If they were not there I would be...," Miguel began, before his mother Maria completed the sentence, snapping: "Out on the street."

"Now I have to support two households. Ours and my son's," she added.

Miguel, who is separated from the mother of his three children, worked as a machinist for 23 years until he lost his job four years ago.

After that, he was only able to find odd jobs in a country struggling with a jobless rate of 26.3 percent.

But since 2011 those jobs have dried up too and he now survives on a monthly benefit of 400 euros for job seekers whose dole entitlements have expired.

Every month, once this benefit money runs out, he heads to his parents' house with his 16-year-old son and 13-year-old daughter to eat.

His oldest son, who is 21 and also out of work, lives with his girlfriend who is working.

"My parents worked like donkeys all their lives and now they must continue to suffer," said Miguel.

"Pensioners are the ones who have saved this country."

Prime Minister Mariano Rajoy, who promised during his successful 2011 election campaign not to cut pensions, introduced a reform this year which will end the indexation of pensions to inflation.

His government will raise pensions by 0.25 percent in 2014, the minimum allowed under the reform and below the average inflation rate of 0.8 percent forecast by the European Commission.

"The government lied. It promised that it would protect pensions. All lies. It is the poor who pay," said Miguel.

The government argues the reform, which links payments to life expectancy and to economic cycles, will better guarantee purchasing power. It says Spain exited recession in the third quarter of this year.

But unions argue the reform will cause Spain's nine million pensioners to lose 15-28 percent of their purchasing power over the next 15 years.

"Pensioners will have a price to pay, but without the reform the system was not sustainable given the rise in life expectancy," said Jose Antonio Herce, an economics professor at Madrid's Complutense University.

The pension reform follows a rise in value-added tax in 2012, and increases in the costs of electricity, gas and water and many medications.

Up until now the only "luxury" Francisco still allowed himself was saving up for a two-week seaside holiday in June. "This year it is going to be difficult," he said.

Maria can no longer stand the conversation. She allows herself an outburst before walking out of the room.