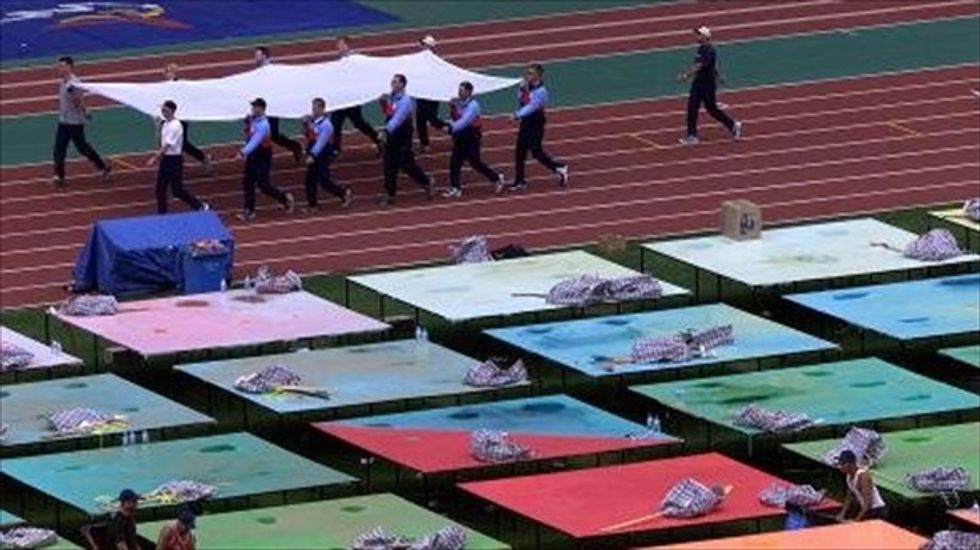 Performers practice carrying the official flag on the eve of the opening ceremony for the Sydney 2000 Paralympic Games on Oct. 17, 2000. [AFP]

A Spanish court on Monday slapped a former sports boss with a fine of 5,400 euros ($7,300) for fielding athletes with no disabilities at the 2000 Paralympics in Sydney in order to win medals.

The Madrid court found the former head of the Spanish Federation for Mentally Handicapped Sports, Fernando Martin Vicente, guilty of fraud and ordered that he pay the fine and return 142,355 euros in government subsidies which the federation received for the athletes without disabilities.

The scandal broke in November 2000 when Carlos Ribagorda, a member of Spain's gold medal-winning intellectually handicapped basketball team in Sydney, claimed that he and other athletes in categories such as track and field, table tennis and swimming were not mentally deficient.

"Of the 200 Spanish athletes at Sydney at least 15 had no type of physical or mental handicap -- they didn't even pass medical or psychological examinations," he wrote in the magazine Capital just days after the Paralympics ended.

Ribargorda said he had played for the Spanish Paralympic basketball team for over two years but had no mental handicap.

He said the only test he had been asked to complete at his first training session was six press-ups, after which his blood pressure was taken.

Spain had their most successful Paralympics in Sydney, winning 107 medals to finish third in the medals table after Australia and Britain.

Martin Vicente resigned as the head of the Spanish Federation for Mentally Handicapped Sports, which was responsible for screening some participants in the Paralympics in Sydney shortly after the Capital article was published, saying he accepted "total responsibility."

He had argued that psychological evaluations of mentally deficient athletes as difficult and that mistakes had been made.

"If someone wants to cheat, it's difficult to detect. It's easy to pretend you have little intelligence but the opposite is difficult," he said when he announced his resignation.

Eighteen other people, including members of the basketball team that went to Sydney and managers of the Spanish Federation for Mentally Handicapped Sports, were also charged over the affair but the court on Monday dropped the charges.

President Donald Trump departed the White House on Wednesday, but that hasn't deterred many supporters of the thoroughly discredited QAnon conspiracy theory of believing he'll still be president for the next four years.

Media Matters researcher Alex Kaplan has spent the morning combing through assorted QAnon message boards and Telegram channels to see how they're coping -- and he's found that they're furiously moving the goalposts to justify their belief that Trump will soon carry out mass arrests of his political enemies for being in a purported Satanic pedophile ring.

One of the great ironies of life is that as you get older time seems to pass much more quickly. But I have found that the last four years have been an exception. I can hardly remember a time before Donald Trump dominated our political culture. But it's over now. Today Trump flies off to Mar-a-Lago to plot his next comeback and Joe Biden moves into the White House to plot a comeback for America.

Four years ago today, Donald Trump proclaimed, "American Carnage stops right here and stops right now." He should have said, "American carnage starts right here, right now." There isn't room here to list it all. And Lord knows, we don't want to relive it anyway. But it's important to remember that Trump's crimes in office go beyond "norm busting" and being a pathological liar. He was corrupt on an unprecedented level and he abused the power of the presidency repeatedly putting his own needs ahead of the national interest time and again. He showed reckless disregard for the greatest public health crisis in over a century and the ensuing economic crisis. And he promulgated an egregious disinformation campaign to overturn the results of the 2020 election, incited his supporters to sack the US Capitol and then stood by and did nothing as they stormed the halls of Congress chanting "hang Mike Pence!"

How world leaders are reacting to Joe Biden's inauguration