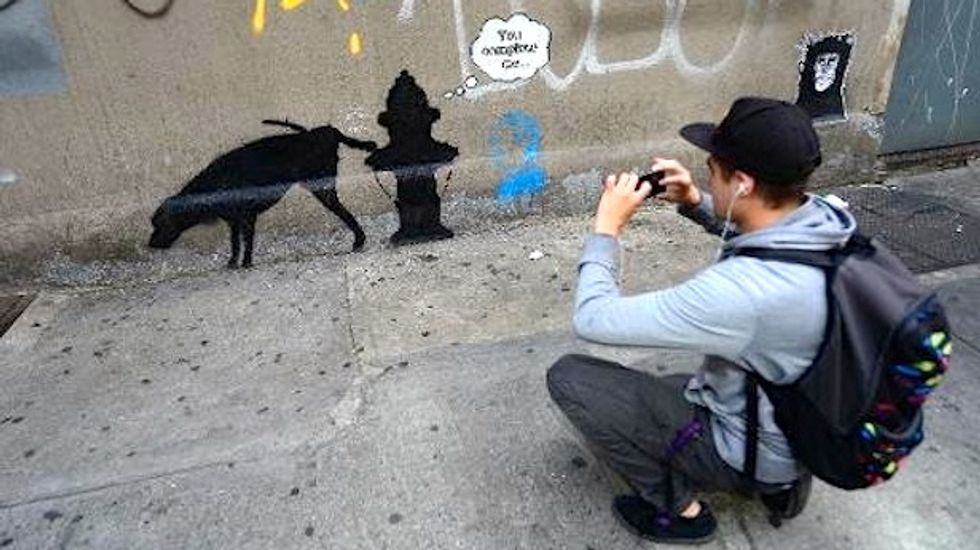 World-famous, reclusive artist Banksy is loose on the streets of New York, hosting a unique show that has whipped up excitement among hipsters and the chattering classes.

The England-based graffiti maestro, who has never been formally identified, has promised to unveil a new piece of art on each day of the month somewhere in the city.

His stenciled designs, known for their irreverent humor and political activism, have propelled him from a graffiti rebel to reluctant star whose work sells for hundreds of thousands of dollars.

But the New York show is free, public and accessible to all.

Painted in secret and announced online, fans rush to track down the elusive piece before they are painted over or "tagged" by rival graffiti artists, often within hours of going viral.

And the name of the show? "Better Out Than In."

"It's just so intriguing, it's like a chase," says actor Lisa Rowe-Beddoe, who has visited each of Banksy's three pieces to date. Her mission is to track down the full set by the end of October.

"There's something just brilliant about Banksy. He's just so original," says Rowe-Beddoe. "It's interactive. It's cool, plus he says cool things."

The latest piece -- a black dog urinating on a hydrant with the words "You complete me" in a speech bubble and the caption "a shoulder to crayon" -- attracted a huge crowd on Thursday.

Teenagers, artists, and professionals gathered to chat, joke and snap pictures on their cell phones -- posing for the camera as they crouched down and pretended to stroke the dog.

"It's a buzz," says Ken Brown, who writes a blog about street culture as he takes pictures of the crowd. "And because he's so well known, it'll be a boon to New York".

Brown was bitterly disappointed when he got to the first Banksy, which appeared on a wall in Chinatown on Tuesday, to find it was already buffed.

"I'm a long-time admirer of Banksy. I feel he's really a rarified genius. He gets humor and puts a lot of things that are missing into his pieces," he says.

Fans can access an audio commentary from a toll-free number inked to the ground, or on the website.

The narration from a man with a smooth American accent, introduced by the kind of muzak pipped out in elevators, is clever and languid.

"Are you looking at one of the great artworks of the 21st century? If so you're in the wrong place. You should be looking at a stencil of a dog peeing on a hydrant," he drawled.

"It's a well known truism that the mark of a great artist is their ability to capture light, so you will note that this piece is rendered entirely in silhouette."

It this irreverence that appeals to Banksy fans.

"I've been waiting my whole life since high school to see one," gushed Ronin Wood, a 24-year-old graphic designer, whipping out his cell phone in uber-cool art neighborhood Chelsea.

"This is my New York accent," was spray painted in thick letters onto a garage door under a disused railway bridge Wednesday, followed by "... normally I write like this" in smaller italic script.

"It's really exciting and really hilarious," laughs Wood, noting the fresh graffiti was daubed in the heart of the gallery district.

Down the road is an art installation of sheep on grass. Next door is a slick gallery.

Banksy's views on the exorbitant sums paid for his art have been expressed in the Oscar-nominated documentary "Exit through the Gift Shop" and people can download for free photos from his website.