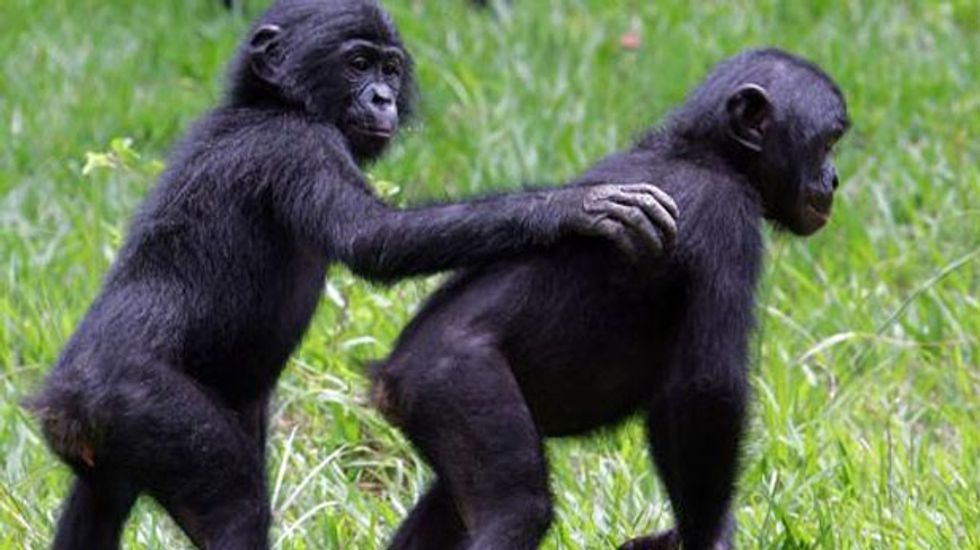 Young bonobos share hugs and kisses to make their peers feel better much the way children do, according to a new study suggesting people and ape emotions function similarly.

The bonobo is as genetically similar to humans as is the chimpanzee, and it is also considered the most empathic great ape.

"This makes the species an ideal candidate for psychological comparisons," says one of the lead researchers, Frans de Waal.

"Any fundamental similarity between humans and bonobos probably traces back to their last common ancestor, which lived around six million years ago."

The new research, published this week in the Proceedings of the National Academy of Sciences, studied video footage of bonobos in their daily interactions at a sanctuary near Kinshasa, the capital of the Democratic Republic of the Congo.

The scientists from Emory University found that bonobos who "recovered quickly and easily from their own emotional upheavals, such as after losing a fight, showed more empathy for their fellow great apes," according to a statement from the school's health sciences department.

Co-lead researcher Zanna Clay said those empathetic bonobos were also more likely to give body comfort, such as hugs, touches, or kisses, to others in distress.

This suggests the apes are able to keep strong emotions in check -- for example stopping themselves from blowing up in anger or crumbling under disappointment. That's an important part of healthy social development for human children as well, the researchers said.

These observations are important to human evolutionary history "because it shows the socio-emotional framework commonly applied to children works equally well for apes," the statement said.

That would mean researchers can make predictions about ape behavior, based on human patterns, and then test whether they are, in fact, the same.

Along those lines, the researchers noted that human orphans often struggle with regulating their emotions -- and the same was found true among bonobos without parents.

In the sanctuary, many of the young bonobos lost their parents to hunters looking for bushmeat. They are reared with substitute human mothers, but "compared to peers raised by their own mothers, the orphans have difficulty managing emotional arousal," said Clay.

"They would be very upset, screaming for minutes after a fight compared to mother-reared juveniles, who would snap out of it in seconds."