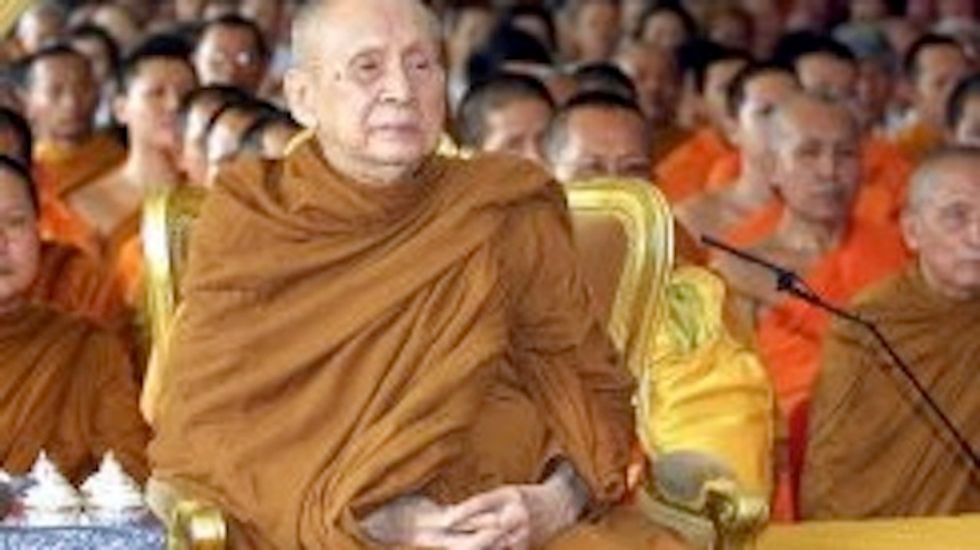 Flags flew at half-mast and crowds of mourners turned out to pay their respects Friday after Thailand's top Buddhist leader died aged 100.

Supreme Patriarch Somdet Phra Nyanasamvara died on Thursday due to a blood infection following recent surgery for an intestinal infection, according to Chulalongkorn hospital where he had been receiving treatment.

Hundreds of mourners lined the busy six-lane road Friday outside the hospital, from where the body of the kingdom's top Buddhist leader was due to be transported to a temple in the capital for religious ceremonies.

People of all ages, from school boys to frail old women, crouched respectfully next to the heavy traffic. Most dressed in the mourning colors of black or white.

Thailand's most senior monk had been hospitalized for more than a decade.

The respected cleric -- a friend of the Dalai Lama -- was born Charoen Gajavatra on October 3, 1913 in the western Thai province of Kanchanaburi and ordained as a novice when he was 14 years old.

He was appointed Supreme Patriarch in 1989 by King Bhumibol Adulyadej, who was "very sad" to hear of his passing, according to the royal household bureau, which was instructed by the monarch to mourn for 30 days.

Government offices and places of education were asked to fly flags at half mast for three days and civil servants were instructed to observe 15 days of mourning, according to Prime Minister Yingluck Shinawatra's office.

It said the government had learned of the Supreme Patriarch's death "with sadness", praising his contribution to Buddhism.

Last year the World Fellowship of Buddhists bestowed the title of "Sangha Leader of the Buddhist World" on the Supreme Patriarch at a meeting in Japan.

Buddhism is Thailand's state religion and around 95 percent of the population is believed to follow it -- the highest percentage in the world.

Figures released last year by the National Office of Buddhism showed Thailand had more than 61,000 monks.

Earlier this year a videotape showing three monks traveling in a private jet, wearing sunglasses and carrying a Louis Vuitton luxury bag triggered fierce debate about the lavish lifestyles of some clerics.