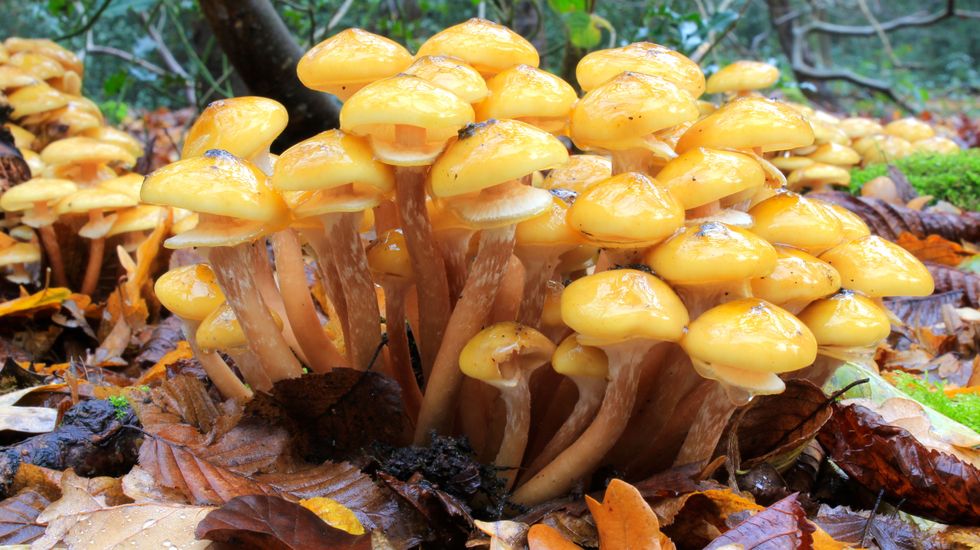 Fluted pillars rise ghostly pale to support roofs like golden brown handkerchiefs as if they are alien creatures breathing through hundreds of delicate gills and not well adapted to daylight and air. They come as a shock, the honey fungus mushrooms. The apple tree trunk has been leaning for years, with old wounds indicating dead wood, but it has always been a good-doer. This year saw a gradual sickening: fewer, smaller, jaundiced leaves; thin, brittle-looking stems; sparse little apples instead of great fat cookers thudding into the grass. Suddenly, as if out of nowhere, the base of the tree is sprouting honey-coloured mushrooms, Armillaria mellea.

I suspected honey fungus was around, in an old garden on land worked at least since medieval times and probably much earlier – I've seen its work before. This beautiful fungus is a scourge of old gardens and orchards. It is a pathogen of living wood and spreads by "bootlaces": black-sheathed rhizomorphs containing parallel bundles of hyphae like fibre-optic cables. These bootlaces can grow many metres through soil from where the fungus is devouring a rotting stump or root to parasitise a new host in living wood. In 1992, scientists investigating Armillaria in a forest in Crystal Falls, Michigan, claimed it was a single organism that covered 15 hectares, weighed 10 tonnes (as heavy as a blue whale) and was more than 1,500 years old.

I wonder if the bootlaces of this fungus reach from an older forest, in a time before Wenlock was a Saxon settlement around its abbey, like a curse. As the moon silvers the edges of clouds, I peer at the mushrooms and bootlaces on the rotting tree to see the bioluminescence honey fungus is noted for, the weird fire mentioned in Beowulf. However hard I stare at the sweet, earth-scented growths, I can see only a few spots of ghostly light like the luminous fragments of an old watch face.