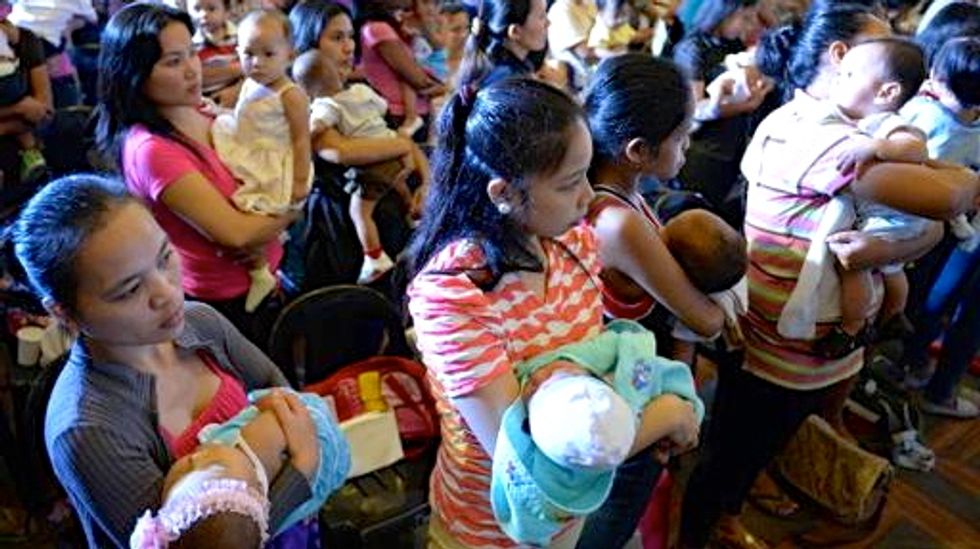 Thousands of lactating mothers across the Philippines simultaneously breast fed their babies on Thursday in an attempt to break a world record and break down social taboos.

Organised by the advocacy group Breastfeeding Philippines, the event was held in 1,000 cities across the conservative, largely Catholic country, where advocates say there remained a stigma against women who breast feed in public.

"When women bare their chests for sex in movies or wear skimpy clothes the public thinks its okay, but when a mother bares her breast to feed a child, people generally think its gross," group director Nona Andaya-Castillo told AFP.

"One of our members was once told to breastfeed her child in the toilet. This thinking and attitude has got to stop."

Thursday's event is meant to break the group's own Guinness World record of the most number of women simultaneously breastfeeding in multiple sites -- 15,218 mothers in 2007.

An estimated 21,000 joined on Thursday, but it would take Guinness representatives up to three weeks to verify the final tally, she said.

At one of the main venues of the event, about 500 lactating mothers were bussed to a convention centre in suburban Marikina city east of Manila.

They sat in plastic chairs and were given tips on proper ways to breastfeed their babies, including techniques in calming an infant and cleaning of nipples.

Twenty-one-year-old mother Jinky Valencia cradled her one-month-old baby, Chrysler, as she tried to coax him to feed, but only a few drops came.

"Maybe I'm just shy. I am not used to doing this around in public, with so many people around," she said. "Maybe I will get used to it eventually, but I don't know if my husband will approve of it."

Passed in 1986, the law, called the Milk Code, prohibits advertising of infant formula to infants under two years of age.

Another law passed in 2009 requires private and public companies to allot time for employees who breast feed, while requiring lactation stations in all public institutions.

"This activity is meant to send a strong message to legislators not to be swayed by these multinational milk companies to weaken our law," Andaya-Castillo said.

The spokesman for the Infant and Pediatric Nutrition Association of the Philippines, a lobby group for the infant formula companies, was not immediately available to comment.