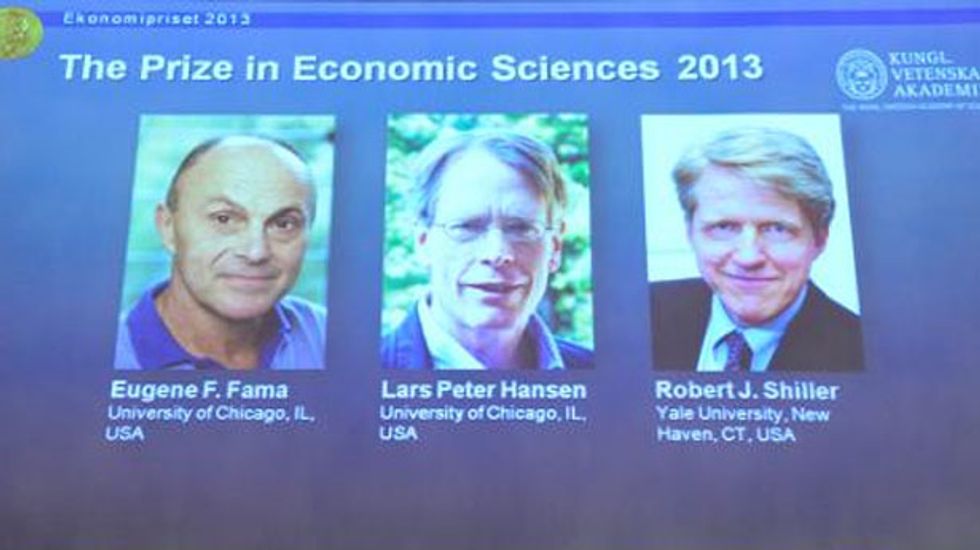 The three "have laid the foundation for the current understanding of asset prices. It relies in part on fluctuations in risk and risk attitudes, and in part on behavioural biases and market frictions," the Royal Swedish Academy of Sciences said.

Fama, 74, and Hansen, 61, are both professors at the University of Chicago, while Shiller, 67, is a professor at Yale University.

The award is for work done on the value of assets, such as stock and bonds, and comes as the global economy is still reeling from the effects the financial market crisis at the end of the last decade.

The three were awarded for "surprising and contradictory" findings showing the difficulty in pricing stocks and bonds and other assets in the short term.

"There is no way to predict the price of stocks and bonds over the next few days or weeks," the academy said.

"But it is quite possible to foresee the broad course of these prices over longer periods, such as the next three to five years."

Shiller, who spoke to the Swedish academy shortly after receiving the prize, said finance "has a body of knowledge that is useful to society."

"(The current crisis) reflected mistakes and imperfections in our financial system that we are already working on correcting," he said.

Shiller has been frequently cited as a possible winner over the past few years, not least because his book "Irrational Exuberance", published in 2000, predicted the collapse of the dotcom bubble.

Beginning in the 1960s, Fama and several collaborators demonstrated that stock prices are extremely difficult to predict in the short run, the academy said.

Hansen developed a statistical method that is well suited to testing theories of how rational investors respond to uncertainty in asset prices.

Ironically for a scholar who has devoted his career to the study of predictions, Shiller said he had not foreseen that he would get the Nobel Prize.

"I'm aware that there are so many worthy people, that I had discounted it. So no, I did not expect it," he said.

The economics prize is the only Nobel not originally included in the last will and testament of the prizes' creator, Swedish scientist and philanthropist Alfred Nobel.

It was established in 1968 by the Swedish central bank to celebrate its tricentenary, and first awarded in 1969. The other prizes have been awarded since 1901.

Americans have dominated the list of economics laureates, with 17 out of 20 laureates coming from the US in the past 10 years.

Last year, US scholars Alvin Roth and Lloyd Shapley won for their work on the functioning of markets and how best to match supply and demand.

The economics prize winds up this year's Nobel season, marked by awards in physics to the fathers of the Higgs boson, the literature prize to Canadian short story author Alice Munro, and the peace prize to the UN-backed Organisation for the Prohibition of Chemicals Weapons.