Tunisian rappers and journalist on trial for 'attacks on public morals' 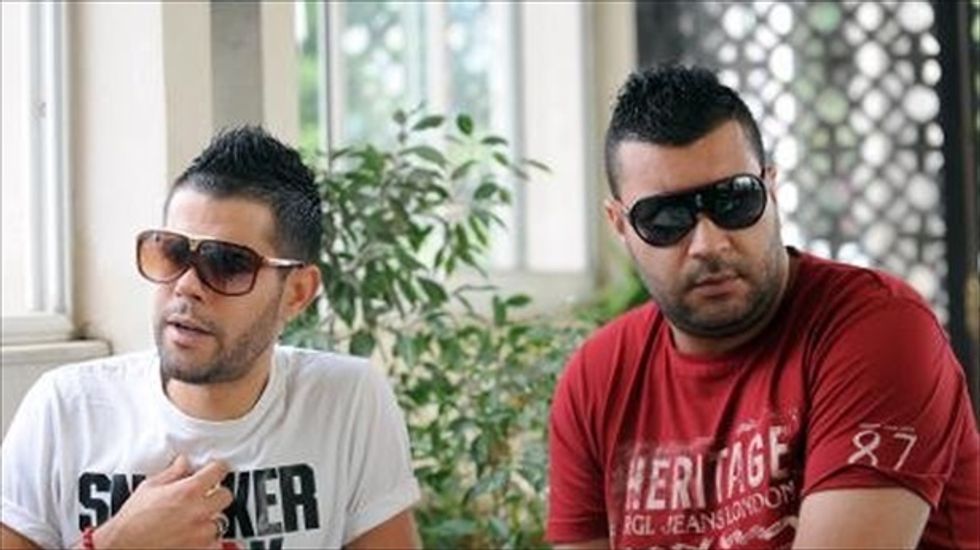 Tunisian rappers Mustapha Fakhfakh (L) and Aymen El-Fikih (R) wait for their trial at a court in the Tunis suburb of Ben Arous on Oct. 7, 2013. [AFP]

Two Tunisian musicians appeared in court Monday over their alleged role in clashes with the police at the trial of a fellow rapper, while a journalist implicated in the same case was absent.

Aymen Feki and Moustapha Fakhfakh, as well as the French-Tunisian journalist Hind Meddeb, are charged with abusing public officials and attacks on public morals, crimes punishable by jail terms of one year and six months respectively.

The charges relate to a confrontation between police and protesters in June outside the Tunis court where Weld El 15 was controversially jailed for aggressively insulting the police in a song.

The jailed rapper was later freed when his jail term was reduced on appeal to a six-month suspended sentence.

After a brief hearing on Monday, at the court near Tunis, the trial was adjourned until November 25, at the request of the defence lawyers.

"My clients are being tried for shouting about injustice after their colleague was convicted," Ghazi Mrabet told AFP, adding that the growing number of trials against musicians "showed that the judiciary wants to silence artists and through them young people."

The accused journalist, Meddeb, left Tunis for Paris after the incident in June, refusing to answer the court summons.

"We have chosen to appear before the judge out of respect for the law," said Fakhfakh, adding: "We are the voice of the people, we fear nothing and we have nothing to lose."

Since the rise to power of Tunisia's Islamist-led government nearly two years ago, after the 2011 revolution, trials especially of musicians and journalists have sparked a wave of criticism -- of the police the judiciary and the government itself.

Last month, another Tunisian rapper, known as Klay BBJ, was jailed for six months for songs judged insulting by the authorities.