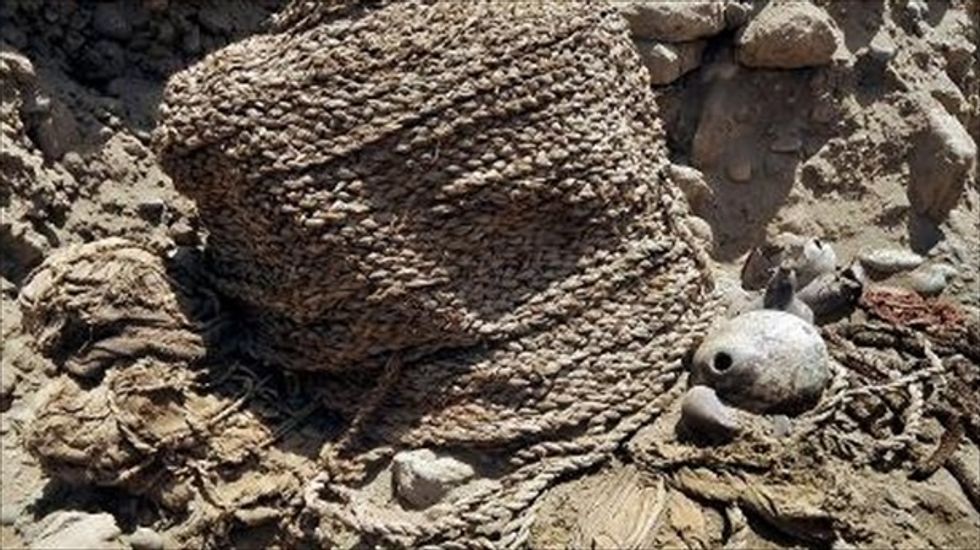 Craftwork are seen around a mummy bundle at the pre-Inca religious complex 'Huaca Pucllana,' in the residential district of Miraflores, in Lima, on Oct. 24, 2013. [AFP]

Two pre-Columbian mummies more than a thousand years old were found in a pre-Incan cemetery in a suburb of Lima, archeologists said Thursday.

"This is one of the most important finds in more than three decades of excavation, because both mummies are intact," Gladys Paz told AFP at the foot of the Huaca Pucllana tomb, an ancient religious complex in the Miraflores neighborhood.

The first signs of the tomb were found five days ago, but the process of unearthing the mummies of an adult and child took time.

The Pacific Ocean and Lima's concrete buildings are visible from part of the huaca -- a Quechua word for religious sites -- that towers more than 20 meters (66 feet) high.

The grave was found intact with offerings and a sacrificed companion, Paz said in reference to the mummified child.

"This is the third intact find among more than 70 tombs excavated since 1981," when researchers began their work at the Huaca Pucllana, a pyramid-like temple built on six acres (2.5 hectares) of land between AD 100 and 600.

In 2010, archeologists discovered the tomb of a woman who was buried with her four children. In 2008, the mummy of a 13-year-old girl was found.

The two recent mummies remain unopened in the place where they were found. They will be taken to a lab in the next four to six months to determine the age and sex of each individual.

Dozens of journalists thronged to the site for a chance to catch a glimpse.

Project director Isabel Flores said archeologists have yet to search through 40 percent of the Huaca Pucllana, built during the pre-Hispanic Wari culture.

There are about 350 huacas in Peru's capital region, interspersed among buildings and homes, hinting Lima's pre-Hispanic ancestors.