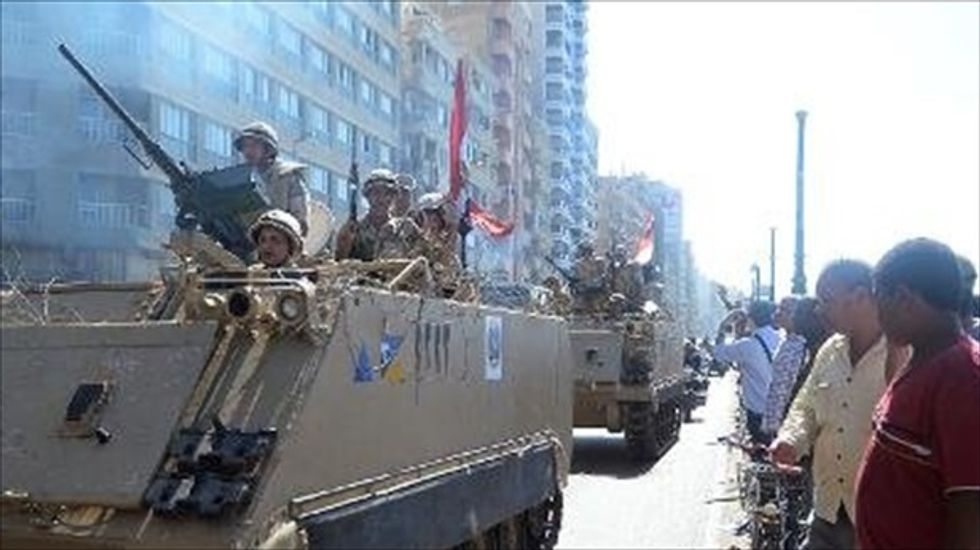 Egyptian security forces patrol the seafront in the northern coastal city of Alexandria on Sept. 20, 2013. [AFP]

The United States is depositing $584 million in remaining 2013 military aid for Egypt into a federal bank account as the US administration reviews whether to release the funds, an official said Tuesday.

The final tranche of some $1.3 billion in annual military aid to Egypt has not yet been disbursed amid political upheavals in the North African nation.

And President Barack Obama's administration is still reviewing the status of the US assistance to Cairo after the military's July ouster of ex-president Mohamed Morsi and a crackdown on Islamists.

But with the end of the fiscal year looming, the State Department decided to protect the funds by depositing them in an account it controls in order to stop them being gobbled up when the books were closed on Monday, September 30.

"The end of the fiscal year was yesterday, so we did recently obligate the remaining FY 2013, which would expire on September 30th unless obligated," State Department spokeswoman Jen Psaki said.

But she insisted "the president still has flexibility here. We still have the ability to control kind of how this is used."

The funds are being placed in a federal reserve account which the US government controls, pending Obama's decision on whether to resume aid to the Egyptian military, Psaki said.

The annual $1.3 billion in US military aid is spent mostly on contracts with US firms to equip Egyptian forces. There is a further $250 million in economic assistance to Cairo, which has not been affected.

But Psaki stressed the outstanding $584 million in military aid had not yet been allocated to specific deals.

"No decision has been made about that. It still is under review," she told reporters.

"It typically goes to a federal account, but it's not there yet. And either way, we still would approve purchases."

In return for more than 20 years as a top aid donor to Egypt, Washington has benefited from peace between Israel and Egypt, priority access to the Suez Canal and valuable anti-terrorism cooperation.

But Obama, in a speech to the United Nations last week, linked continued US support for Egypt to the interim military leadership's willingness to return to democracy.

The United States had "purposely avoided choosing sides" after the military's July 3 overthrow of Morsi, but warned "our support will depend upon Egypt's progress in pursuing a democratic path," Obama said.