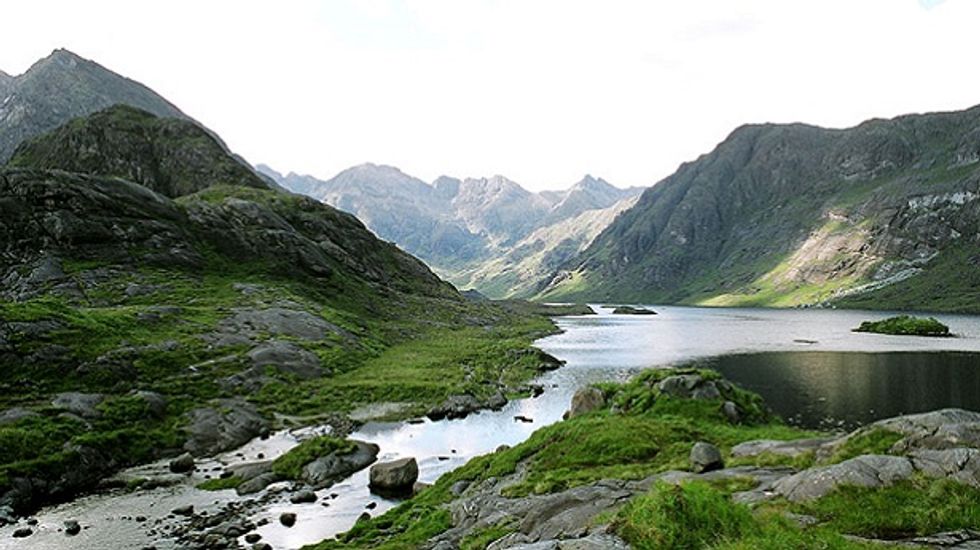 On a fishing boat off the coast of Massachusetts in the early 1960s an American boy first began to hear the call of a distant land echoing across an ocean and down through generations. David MacIsaac recalls fishing with his uncles and brothers, all lobstermen, and hearing stories of Scotland and the Hebrides, the land of his ancestors. "They would point in an east-north-east direction and say: 'If you follow that direction in a straight line, you will reach Scotland', and I knew in my heart that I would go there one day."

That day came 10 years ago when MacIsaac – now a teacher – at last visited Scotland and discovered on his travels that the country was crying out for teachers and headteachers in its rural communities. Within two years he had been given leave to come to Scotland to teach and is now the head and single teacher of Ae primary school, a 17-pupil facility just outside Dumfries, a post he has held for more than five years.

He felt he was fulfilling his destiny until one day last month when a letter from the Home Office arrived, informing him that he was no longer welcome in the land of his forefathers and that his application to remain in the UK indefinitely had been refused.

"It was as if time simply stopped when we got that letter," said MacIsaac, as his wife Susan slipped her hand into his. "I left everything behind in America to come here and have done all that is required of me every step of the way to attain permanent residence status. When my first visa expired in 2009, I applied for a three-year skilled worker permit, and when that ran out last year I was advised by the Home Office to apply for leave to remain permanently."

The extraordinary case of MacIsaac has quickly become a Scottish cause celebre. Locally, he is held in high regard as an outstanding headteacher and there is dismay and deep resentment at the Home Office's actions. A petition has been started, while the Dumfries and Galloway education authority and local politicians from all parties have asked the Home Office to think again.

Dumfries and Galloway councillor Andrew Wood is devastated at the prospect of the village losing him. "He is an outstanding teacher and leader and a real asset to this community. He has opened up our school to the community in so many ways. There is a petition under way and parents and children are devastated that he could be lost to us."

Russell Brown, the Labour MP for the area, has also contacted the Home Office. "We have a shortage of headteachers in local primary schools. It would be a real blow if David is prevented from continuing his job in Ae. We need the minister to use a bit of common sense."

When you read through Britain's official thumbs-down to MacIsaac it doesn't take long to realise that something has gone badly wrong in this case. The reasons given seem outlandish and the tone is callous, especially in respect of the status of his marriage to his wife of four years, Susan, a local artist, whom MacIsaac met in 2006. It seems he might have ticked a wrong box, though he heard nothing from the case worker assigned to his case in the 10 months it was in their possession.

All MacIsaac's pupils and their parents attended the wedding, as well as teaching colleagues and friends who flew in from America. The Home Office was also made aware of the union. Now though, it believes it is a sham marriage, saying: "It is not accepted that the evidence you have provided is sufficient to confirm that there is a genuine and subsisting relationship between you and your sponsor [his spouse]."

Sham marriage? Not long after the wedding took place, Susan's elderly and infirm parents moved in with them and MacIsaac became their official carer. Last year his wife was diagnosed with cancer. A session of radiotherapy has just been completed and she will undergo surgery early next year. "He has been my rock," she says, "and I simply don't know how I would cope if he were to be deported."

The Home Office, though, is upbeat about the couple's prospects should MacIsaac's appeal against deportation fail, noting that: "English is the first language of both you and your partner; therefore language is not considered to be an insurmountable obstacle to your partner accompanying you to the United States."

MacIsaac's many supporters say he is a poster boy for what the Home Office under the current coalition government seems to value in those it wants to remain in Britain. He is a highly qualified and gifted leader and has had paid work from the minute he stepped off the plane eight years ago. English is his first language and he is married to a UK national. And, in the dismal argot of the modern British bureaucrat, he has a transferable skill-set which has been put to good use in a rural community.

On his first visit to Scotland, MacIsaac travelled to the Hebrides and landed on the island of Eriskay to seek out his kinsmen. There he discovered that the MacIsaacs were among the thousands of islanders and highlanders to have been thrown off their land in the 1850s during the Highland Clearances and forced to sail to America. A century and a half later, according to his growing band of supporters, time is running out to prevent another gross injustice being visited on one of their descendants.