Unhappy landing ahead for European satellite running out of fuel 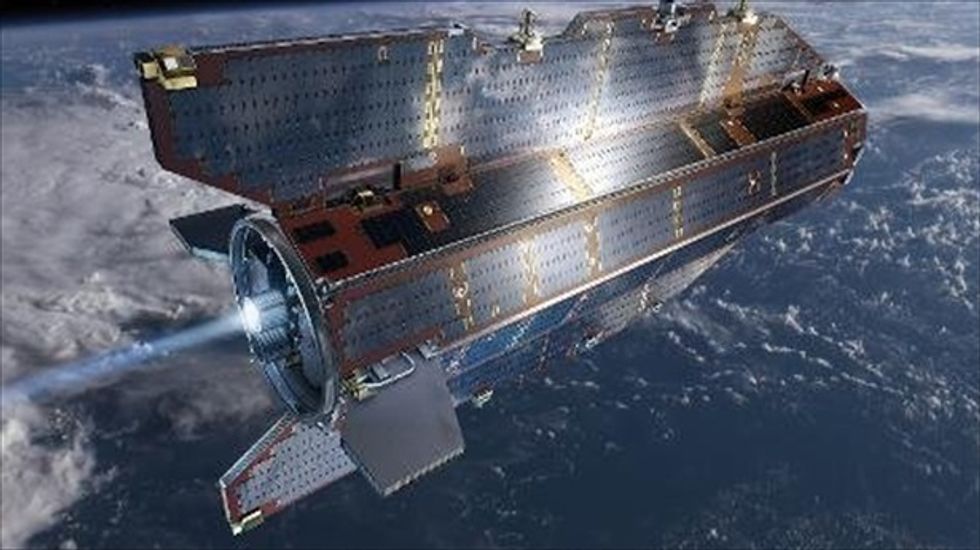 Undated artists impression of the Gravity field and steady-state Ocean Circulation Explorer (GOCE) satellite which is planned to lift off from Plesetsk on March 16, 2009. [AFP]

A satellite monitoring Earth's gravity field since 2009 will run out of fuel "in the coming days" and eventually crash, with little risk to humans, the European Space Agency said Friday.

About 40 to 50 fragments with a combined mass of 250 kilogrammes (550 pounds) are projected to hit our planet within weeks of the GOCE satellite running out of fuel, according to spacecraft operations manager Christoph Steiger.

"We are very close to the end," he told AFP on Friday, when the pressure in the satellite's fuel tank dropped below 2.5 bar -- the minimum required for full operation.

Not yet known is when and where the fragments will impact -- over the ocean or on land.

The pressure in the orbiter's tank is expected to drop to zero no later than October 26 but the engine will likely stop working before then, said Steiger.

"Right now, it is not possible to predict where it will happen, it could be anywhere. The closer we get to the reentry point, the more precisely we will be able to say.

"Roughly one day before (impact), one can exclude certain regions of the Earth. A few hours before, we will be able to tell with... a few thousand kilometres of precision."

The Gravity Ocean Circulation Explorer (GOCE) was launched into orbit in March 2009 at an altitude of just 260 kilometres (160 miles).

It has stayed aloft thanks to its unusual aerodynamic shape and an ion propulsion system.

GOCE's stock of 41 kg of fuel stood at about 350 grammes on Friday. When it runs out completely, the satellite will start losing altitude, become unstable and eventually de-orbit.

But about a quarter of its mass will survive, hitting the surface in a trail of fragments over an area of a few hundred kilometres.

"The risk is very small, but it is not zero," said Fernand Alby, in charge of space debris and space surveillance at France's National Centre of Space Studies (CNES) in Toulouse.

"Per year, it is estimated that about 100 tonnes of manmade space debris is reentering (the atmosphere), out of which between 20 and 40 tonnes survive reentry... and impact somewhere on Earth," Steiger said.

In 50 years of spaceflight, there have been no casualties from manmade space debris reentering, he insisted.

The 350-million-euro ($465-million) mission has lasted twice as long as its initially scheduled 20 months.

Scientists say it has returned reams of data on Earth's gravity field and ocean circulation.

GOCE was designed and built before 2008, when international recommendations were adopted that a scientific satellite must be able to execute a controlled reentry, or burn up completely after its mission.

Steiger said a global space debris coordinating committee was monitoring the satellite to predict its point of reentry, "and we are passing on the information to national authorities".

Convicted murderer to be executed in Alabama barring last-minute stay

An Alabama man convicted of murdering a woman during a robbery is to be executed on Thursday barring a last-minute intervention by the US Supreme Court or the governor of the southern state.

The Arizona State University Police Department has asked county prosecutors to charge four people with misdemeanors after a protest against U.S. Sen. Kyrsten Sinema interrupted a class she was teaching and ended with an activist following her into a bathroom.

'Quit fighting the last election': A major GOP figure just called for Republicans to 'move on'

Former Senate Majority Leader Trent Lott (R-MS) believes Republicans need to move on from Donald Trump's fixation on the 2020 election, which was won by Joe Biden.

"You have to quit fighting the last election to get some things done before you get into the next election, for heaven's sake," Lott said in a new interview with Spectrum News.