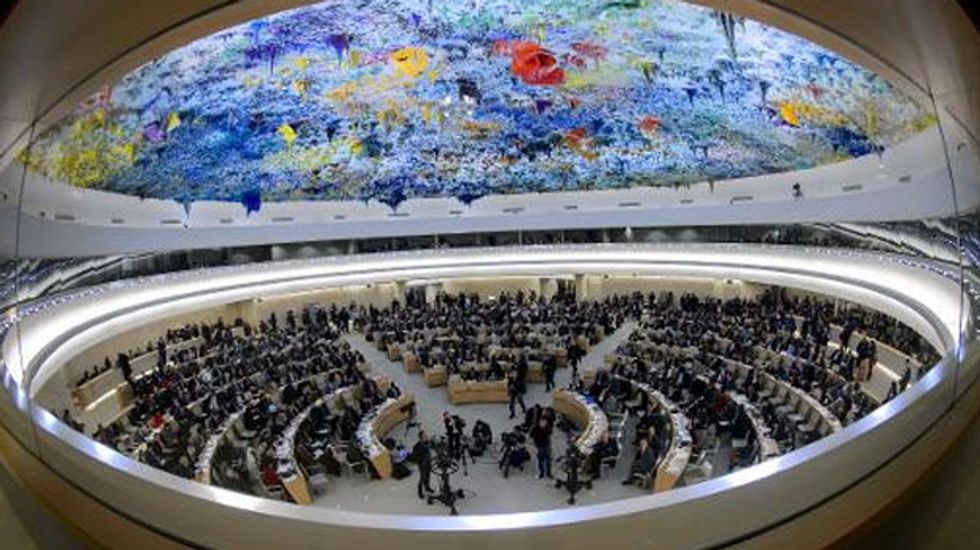 A relief carving of a naked man at the UN's Geneva headquarters was covered up on Monday, apparently to spare the blushes of Iranian diplomats ahead of fresh talks on the country's nuclear drive.

UN officials would not comment on why the wall relief, inspired by Michelangelo's "Creation of Adam", had been masked by a large white screen, referring questions to the Swiss authorities.

But Swiss newspaper Tribune de Geneve claimed that the aim was to avoid offending the Islamic republic's delegation for the talks taking place on Tuesday and Wednesday.

Iranian men are expected to cover their arms and legs in public, with women further obliged to cover their hair and wear loose clothing in line with the hardline interpretation of Islam endorsed by powerful clerics in the country.

Donated by Britain to the UN's forerunner the League of Nations in 1938, the larger-than-life reclining figure was sculpted by Eric Gill, and tops the entrance to the building's Council Chamber where the talks are due to take place.

Swiss officials declined to address the newspaper's claim, telling AFP that the aim was to provide a neutral backdrop at the entrance to the meeting hall.

Although the talks are to take place in the UN's 1930s-era Palace of Nations, the world body is not their official host.

Instead, Switzerland was asked to organise the meeting by the so-called P5+1 group made up of the five permanent UN Security Council members Britain, China, France, Russia and the United States, plus Germany.

According to a report from CNN, former first lady Melania Trump is hard at work hiring and setting up an office at her current residence at Mar-a-Lago with the plan to keep her "Be Best" anti-bullying campaign alive even though she and her family are now out of the national spotlight.

As the report notes, the wife of the former president has already hired on three former White House aides to keep her initiative going, which CNN notes is a change from her White House time when only one person was employed to help her use her bully pulpit to defend bullied children.

"Trump's post-White House office will consist of three of her White House staff members, the sources confirmed to CNN. Hayley D'Antuono served for four years as the former first lady's director of operations and trip supervisor, and is now Trump's chief of staff," the report states before pointing out, "Trump often did little to help clarify or expand on her platform during her time in the White House, often going weeks between Be Best-focused public events. The East Wing policy office was not robustly staffed, at times sat vacant, and at most had one full-time, dedicated East Wing employee."

The report states that the wife of the ex-president is looking for office space in Palm Beach.

"Trump's office is for now functioning out of former President Donald Trump's private club, Mar-a-Lago, which also is where the former first family is living, and the staff members are at times working remotely," CNN reported.

The news outlet also noted that Melania Trump left the White House with her favorability rating at only 42 percent -- plummeting from a high of 57 percent recorded back in May, 2018, when she attended the funeral for the late President George H.W. Bush without her husband accompanying her.

A supporter of former President Trump is facing federal charges after a raid on his home in Napa, California, uncovered dozens of weapons, thousands of rounds of ammunition, and materials that could be used to build pipe bombs, HuffPost reports.

Ian Rogers, 44, is charged with the federal crime of unlawful possession of unregistered destructive devices. He was arrested earlier this month.