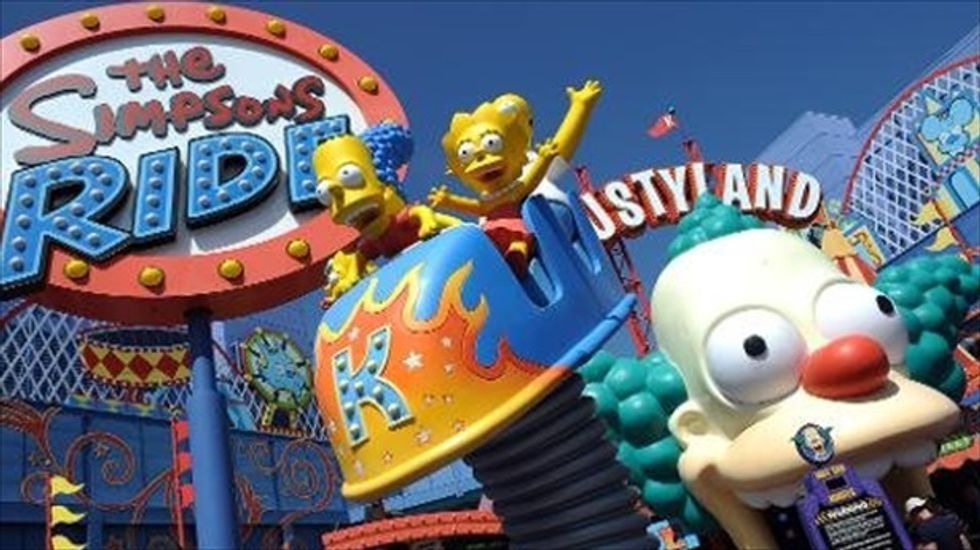 View of the 'The Simpsons' and 'Krustyland' attractions at Universal Studios in Hollywood. [AFP]

Hollywood's Universal Studios theme park has cancelled a Halloween show based on the "Bill and Ted's Excellent Adventure" franchise after criticism that a scene where Superman turns gay was homophobic.

The theme park, which runs hugely popular "Halloween Horror Night" evenings in the run-up to the Oct. 31 holiday, posted a one-line statement on its website announcing the "Bill and Ted's Excellent Halloween Adventure" segment had been pulled.

"After thoughtful consideration, Universal Studios Hollywood has made the decision to discontinue production of the Halloween Horror Nights' 'Bill & Ted' show for the remainder of its limited run," it said.

In the offending scene, Superman is sprinkled with fairy dust and becomes ostentatiously camp, engaged in what gay rights group GLAAD called "a series of gay stereotypes for the audience to laugh at."

GLAAD spokesman Wilson Cruz welcomed the decision to cancel the "Bill and Ted" segment, which has been running only on select nights, and which was preceded by a warning that it included adult humor, according to the Los Angeles Times.

"NBCUniversal has taken quick and strong action regarding this matter and also started a productive dialogue around future 'Bill & Ted' programming to ensure that all park visitors can have an enjoyable experience," he said.

"This decision falls in line with NBCUniversal's history of including groundbreaking and positive depictions of LGBT people across its brands."

Bill and Ted's Excellent Adventure was a 1989 film starring Keanu Reeves and Bill Preston. It was followed by Bill and Ted's Bogus Journey in 1991, and a third film is reported to be in development.