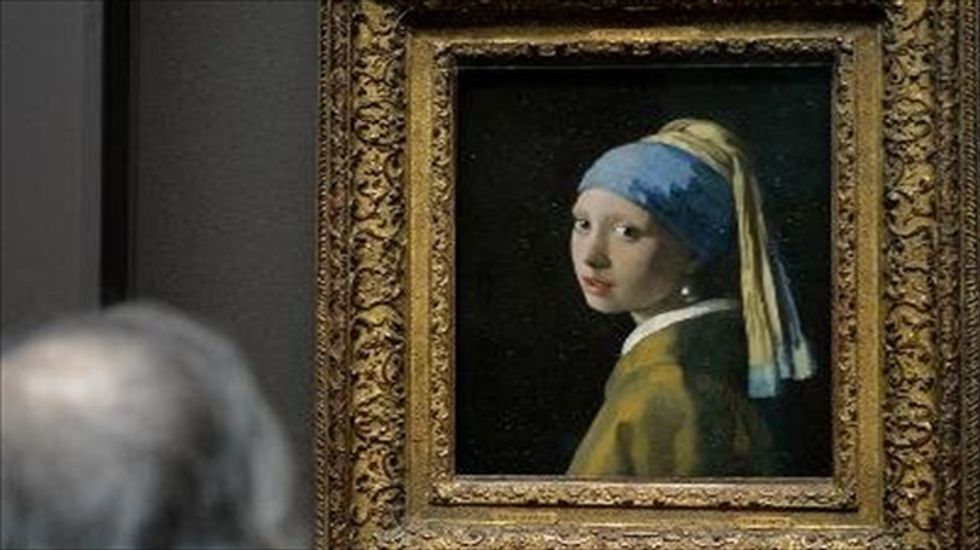 'Girl with a Pearl Earring' by Johannes Vermeer is displayed at The Frick Collection in New York on Oct. 21, 2013. [AFP]

"Girl with a Pearl Earring", the much-loved Dutch masterpiece that has intrigued art lovers for centuries, goes on exhibition in New York Tuesday, set to draw huge crowds.

Painted by Johannes Vermeer around 1665, it is the highlight of 15 extraordinary 17th-century paintings on loan to The Frick Collection until January 19.

The canvas has enjoyed a cult following since becoming the subject of a best-selling novel in 1999 and a Hollywood film starring Scarlett Johansson in 2003.

The Dutch Golden Age exhibition has been four years in the making and is expected to be hugely popular if for this painting alone, said Frick director Ian Wardropper.

The Frick, which is one of the smallest galleries in New York, is preparing to welcome a maximum of 2,000 people a day or 12,000 a week, Wardropper told AFP.

"For us it is a huge number. That is why we ticketed it, so we have some control, and people won't feel they are overwhelmed," he told AFP.

New York is the latest step in a globe-trotting tour for the painting while The Royal Picture Gallery Mauritshuis in The Hague undergoes renovation work.

It is the first time in three decades "Girl with a Pearl Earring" has been seen in New York.

Just 45 by 40 centimeters (17.7 by 15.8 inches), it shows a young girl glancing over her shoulder, wearing a blue and yellow headscarf and a pearl earring.

"Girl with a Pearl Earring" was bought by collector Arnoldus Andries des Tombe in 1881 for the equivalent of $1 and later bequeathed to the Mauritshuis.

Most recently restored in 1994, it will be the sole canvas on view in Frick's Oval Room, with the rest on display in the East Gallery.

Other highlights in the "Vermeer, Rembrandt and Hals: Masterpieces of Dutch Painting from the Mauritshuis" exhibition include Carel Fabritius's "Goldfinch" and Rembrandt's "Simeon's Song of Praise" from 1631.

Tickets went on sale in July and have been issued on specific time slots to avoid overwhelming crowds.

On three Friday evenings a month, access will be free on a first-come, first-served basis.

More than 10,000 people a day visited "Girl with a Pearl Earring" and 47 other works from the Mauritshuis last year in Tokyo, Wardropper said.

Vermeer, who lived from 1632-1675, is one of the most celebrated artists from the Dutch Golden Age, an unprecedented period of production in fine art.

Out of thousands of canvases, experts believe that only one to 10 percent have survived to the present day.

After New York, the painting will be on display at the Palazzo Fava in Bologna, Italy from February 8 to May 25, then back to the Mauritshuis for its re-opening.