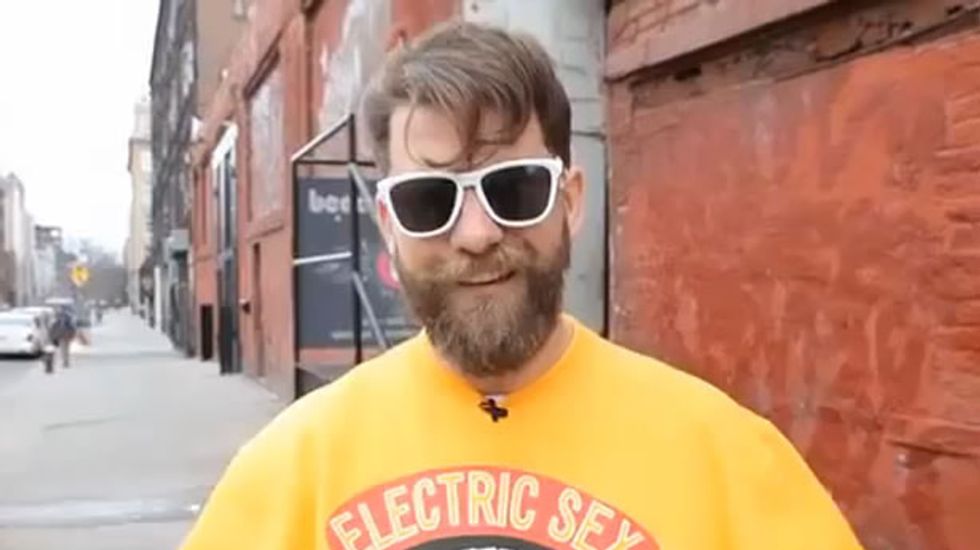 Vice co-founder Gavin McInnes, who left the publication in 2008, yesterday complained about the "evolution" of women in the workforce.

"Why are all you wimps complaining that violence is bad, 'macho' is bad," he said. "That's how we got here. This idea of this beta male being in control is, what, 20 years old? You're going against 40,000 years of evolution."

McInnes followed his dismissive comparison of a 20-year-old theory to "40,000 years of evolution" by claiming that "if you want to talk about baseless, stupid violence, like punching someone in the face in a bar, that has been plummeting for the past 50 years."

After contradicting his own standards of evidence, McInnes claimed that "men are the majority of breadwinners in the Western world," and that "women are forced to pretend to be men. They're feigning this toughness. They're miserable. Study after study has shown that feminism has made women less happy. They're not happy in the work force, for the most part."

"I'm sure 7 percent," he continued. "Seven percent of them, I guess, like not having kids." However, he said, "by enforcing that as the norm, by pulling them away from what they naturally want to do, we're making them miserable."

He then tried to prove that men are "tougher" by relating a story about an employee who had been promoted. "Just the other day," he said, "this coworker was telling us 'What the f**k, you moved this director to this other job?' And I had to come back and say, 'Don't you give me this "What the f**k?" s**t. I had to move that director to a job that paid him more money."

"It was almost like a fist-fight with words," McInnes said. "And I had to do that in order to generate income to pay my bills to feed my children. So this innate 'toughness' that men have is crucial to our survival."

When Eric Garland pointed out that his wife, a professor of medicine, was very happy with her life, McInnes responded "good, you found some anecdotal evidence to prove your point."

Mary Anne Franks, a professor of law at the University of Miami, then noted that "it's a sign of weakness -- a figurative impotence -- to say that 'it must be like this,' and that 'all of you who are doing things differently are messing with nature and I really need you to stop.'"

Michael Aldis, a professor of psychology at Clark University, added that he agrees with Professor Franks, and that if viewers watch McInnes, they "can see exactly how 'masculinity' works: people define it in a particular way, and then threaten those who don't conform."

McInnes claimed that he's "not the one doing the enforcing," and insisted that he's just trying to explain how women "naturally behave."

When challenged by Professor Franks, he responded "I'm not 'insisting anything' you f**king idiot."

Watch the entire conversation below.