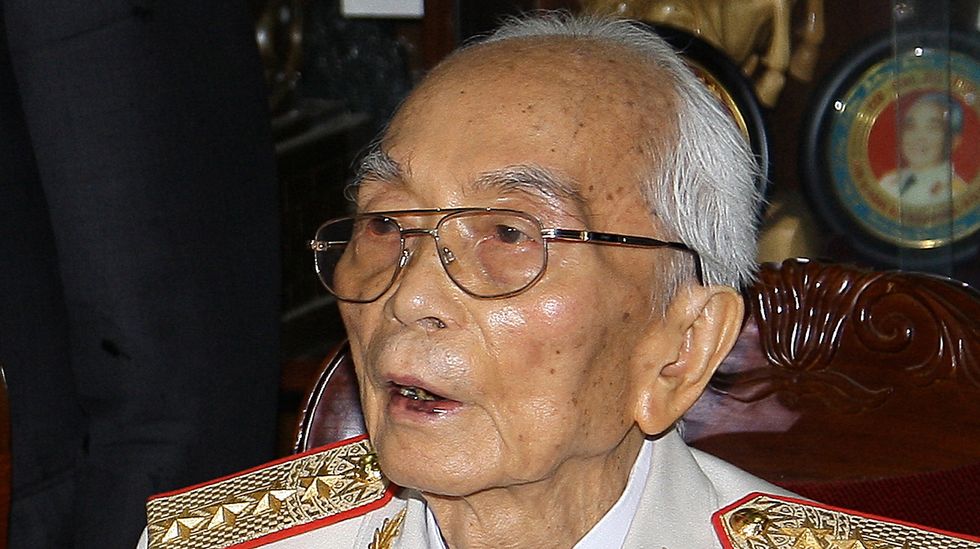 Vietnam's legendary General Vo Nguyen Giap, whose guerrilla tactics defeated the French and American armies, died Friday at the age of 102, prompting an outpouring of tributes for the independence hero

"I can confirm that General Giap died at 6:08 pm (1108 GMT) today," a government source told AFP on condition of anonymity.

A military source confirmed the time of Giap's death at Hanoi's 108 military hospital, where he had been living for the last three years. He died surrounded by his family.

State-run online newspaper VNExpress said his body has been moved from the special care zone to the morgue at the hospital with a guard of honour to pay respect.

"He's a mythic, heroic figure for Vietnam," said Carl Thayer, an Australia-based scholar of the country.

Vietnamese Internet users immediately begun paying tribute to the general, who remained hugely popular in Vietnam despite being relegated to the political sidelines after the war.

"Rest In Peace the hero of the people. You will always be our greatest general," one wrote, in a posting typical of the outpouring of grief which erupted online as news of his death emerged.

Giap, born on August 25, 1911 into a well-off peasant family, was was a self-taught soldier whose only military lesson came from an old encyclopaedia entry describing the mechanism of hand grenades.

He went on to secure victory in 1954 at Dien Bien Phu, the battle that ended French rule in Indochina and precipitated nearly two decades of US involvement in Vietnam.

"General Vo Nguyen Giap is one of the most talented military strategists and most famous generals, not just in Vietnam, but in world military history," Vietnamese historian Phan Huy Le told AFP.

His greatest triumph will always be the Dien Bien Phu victory, based on an astounding logistical feat by his Viet Minh fighters, who surprised the French by hauling their artillery into surrounding jungle hills from where they pounded enemy positions below.

"It was the spark that lit the powder keg for the empire. Less than six months after Dien Bien Phu, the Algerian war (for independence) began with the All Saints Day attacks. Dien Bien Phu was effectively where it all started," said French historian Hugues Tertrais.

For two decades after Dien Bien Phu, Giap, a former history teacher who was fluent in French, continued to command his forces as they battled American troops and their surrogate regime in South Vietnam until final victory on April 30, 1975.

The fall of Saigon fuelled his near mythical status overseas as a master strategist and inspired liberation movements everywhere.

But Giap's success on the battlefield had earned him some powerful enemies at home -- including party chief Le Duan -- and after the war, in 1980, Giap lost his post as defence minister.

He was eased out of the Politburo in 1982 and left politics officially in 1991.

Yet he continued to speak out until well into his 90s about sensitive issues such as corruption and bauxite mining, and his popularity, particularly among the young, remained undiminished.

He is survived by Dang Bich Ha, his wife since 1949, and four children.