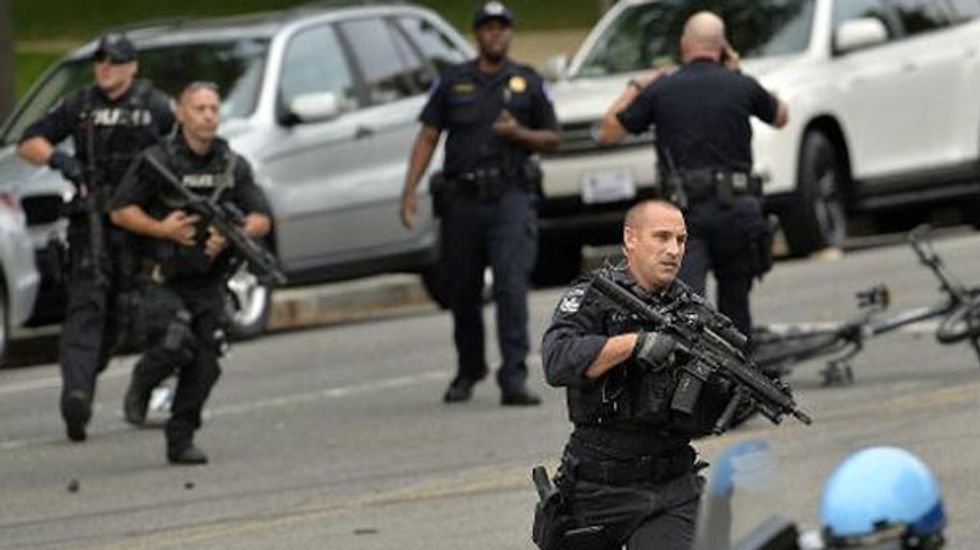 A volley of shots rang out outside the US Capitol building as police intercepted a suspect Thursday, sending lawmakers and tourists scattering for cover and triggering a massive security operation.

Police said a driver had attempted to get past a barricade outside the White House, just over a mile away, and had been pursued across downtown Washington to the building that houses the country's lawmakers.

"There was a vehicle in the vicinity of the White House that apparently attempted to pass a barricade," Kim Dine, chief of the Capitol Police, told reporters after a briefly instituted security lockdown was lifted.

"That vehicle was attempted to be stopped by Secret Service, uniformed division," he said, referring to the federal agency charged with protecting the presidency.

"Shots were potentially fired. They pursued the vehicle. The vehicle came, struck one of our vehicles here at Second and Maryland," he continued, referring to two streets in downtown Washington.

One of the cars crashed into a police barricade, Dine said, noting that the areas where the vehicles ended up had now been declared secure.

Dine and other officials said the driver was believed to have been a woman and that there was thought to have been a child in the car. A police officer was seen carrying a child away from the scene.

An AFP photographer saw at least one person receiving emergency medical assistance on the north side of the complex. Police said one of the officers was hurt in the crash.

"We have no information that this is related to terrorism or is anything other than an isolated incident," Dine said.

The incident occurred several days into a US government shutdown and the security scare shattered the previous focus on Washington's political gridlock.

Senators at the Capitol told reporters that they had heard up to six shots while police sealed off the building and emergency vehicles converged at the scene.

"There was a female involved. There was a high speed chase by the police, involving a female, on Pennsylvania Avenue. There were shots fired," a government official told AFP.

A police car was left badly damaged by what appeared to be a collision on Constitution Avenue, immediately outside the Capitol, and a group of tourists were escorted inside. One of them told AFP that there had been a chase involving a black car that then sped toward the building.

The incident was the second major security breach in the US capital in less than three weeks, after a September 16 incident in which a deranged gunman stormed the nearby Navy Yard and killed 12 people.

About half an hour after the Capitol incident began, the security lockdown at the Capitol was eased and the doors reopened. There were unconfirmed reports that the shooter was in custody.

"We heard what was about four shots," Senator Bernie Sanders said.

Outside the Dirksen office building, which houses senators' offices, staff members not sent home by the shutdown could be seen taking cover behind trees and vehicles.

Every minute or so, the Capitol Police made a loudspeaker announcement: "If you are in an office building, remain sheltered in place."

The White House was also briefly placed in lockdown, with Secret Service agents in tactical gear deploying around the building. The security alert was later partially lifted.

Juan Vargas, a congressman from San Diego, told AFP a police officer ordered him to leave the area and to remove the gold lapel badge that identifies him as a congressman.

"Then I got a call immediately from my staff, saying 'be careful, there's been a shooting'," he added.

Aaron Eckhouse, 23, who works for the National Sustainable Agriculture Coalition, was in his office across from the Dirksen building.

"It sounded like pops, like pop-pop-pop-pop," he said. "Two bursts maybe. Definitely more than two shots. It took a minute for it to register with everyone. Then everyone rushed to the window."

From the window he saw police cars and officers, but no suspect.