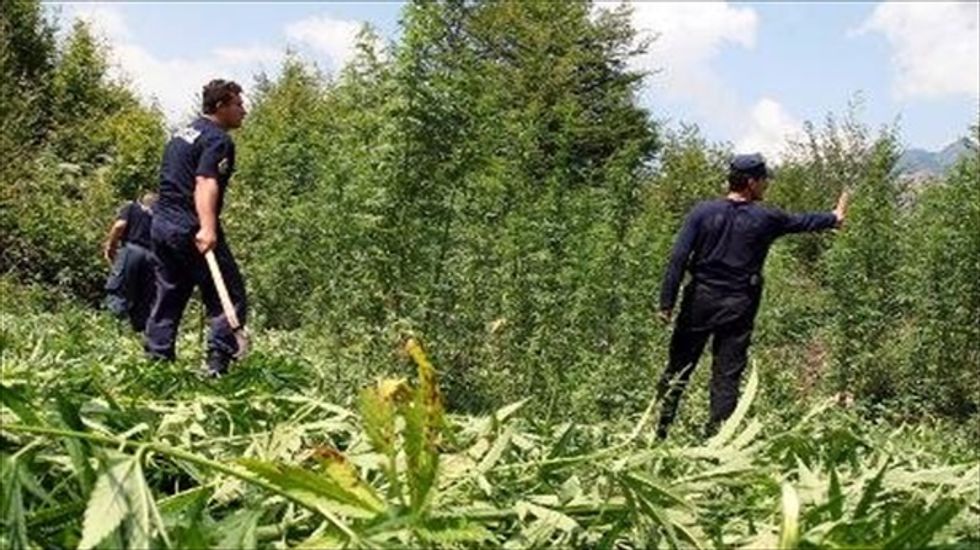 Special police forces document and destroy a field of cannabis plants in a remote mountainous area of northern Albania, in the village of Ducaj. [AFP]

At least 700 people, mostly women, have sought medical help for apparent drug intoxication in a village believed to be the largest marijuana producer in the Balkans, doctors said Friday.

All the patients, suspected workers in cannabis fields in the southern Albanian village of Lazaret, had similar symptoms and "serious disorders from cannabis intoxication," doctor Hysni Luka of the hospital in nearby town Gjirokaster told reporters.

"The patients, among them also teenagers and even children younger than 15 years, have suffered from bouts of vomiting, stomach pain, heart problems and high blood pressure," Luka said.

The symptoms were clearly related to their work in planting, harvesting, pressing and packing the cannabis, Luka told Top Channel TV station.

At least 40 percent of workers on the cannabis fields in Lazarat, a tightly-guarded village some 240 kilometres (144 miles) south of the capital Tirana, were teenagers.

Authorities say that Lazaret, close to the Greek border, is Albania's largest cannabis producer, with an estimated annual production of some 900 tonnes worth around 4.5 billion euros ($5.9 billion).

In August, police detained at least 50 seasonal workers harvesting the cannabis fields there, while two people were injured by stray bullets fired by drug traffickers trying to prevent police from entering the village. Lazaret is heavily guarded by armed patrols.

Albania is considered a major transit zone for drugs and the leading supplier of cannabis in Europe.