Activists warn: 200 million people are at risk from toxic pollution 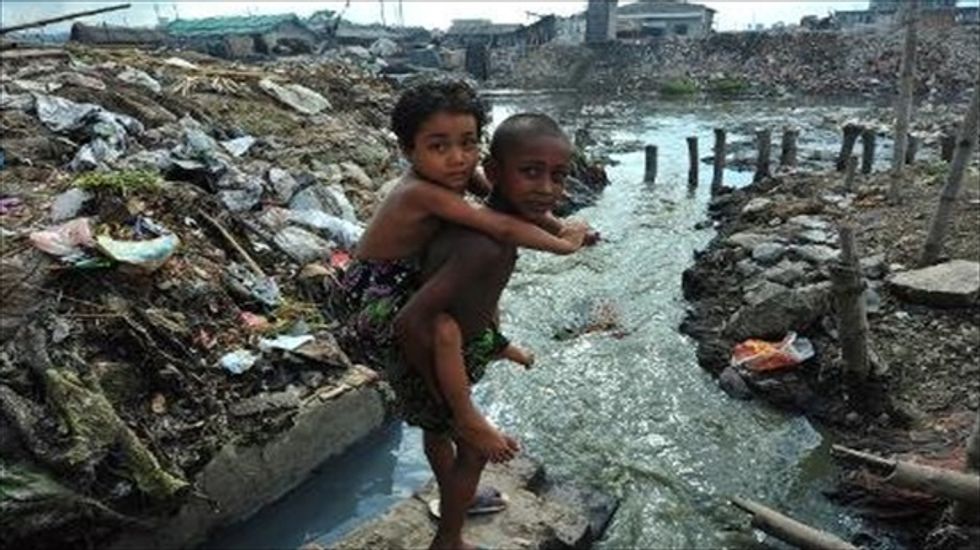 Bangladeshi children prepare to cross a polluted stream near a tannery in the Hazaribagh District of Dhaka. [AFP]

"We estimate that the health of more than 200 million people is at risk from pollution in the developing world," said Richard Fuller, who heads US-based environment watchdog the Blacksmith Institute.

The institute and Green Cross Switzerland published a new top 10 list of the "World's Worst Polluted Places" -- their first since 2007 -- based on more than 2,000 risk assessments at contaminated sites in 49 countries.

Each year, Ghana imports around 215,000 tonnes of secondhand consumer electronics, mainly from Western Europe -- a number that is expected to double by 2020, according to the report.

The main health concern linked to e-waste processing in Ghana is the burning of sheathed cables to recover the copper inside, the report said, pointing out that the cables can contain a range of heavy metals, including lead.

Soil samples from around Agbogbloshie have shown concentrations of that toxic metal that are 45 times more than accepted levels, the report said.

"E-waste is really going to be a challenge. It's growing exponentially. Everybody wants a computer, a laptop, the modern devices, so I think we're seeing the tip of the iceberg," Blacksmith research director Jack Caravanos told reporters in a conference call.

Other newcomers to the 2013 list included Indonesia's Citarum River Basin in West Java, an area that is home to around nine million people, but also some 2,000 factories.

The river, which is used among other things for human consumption and to irrigate rice farms, is contaminated by a wide range of toxins, including aluminium and manganese.

Drinking water tests have shown lead at levels more than 1,000 times above US standards, the report said.

Another Indonesian area, Kalimantan on the island of Borneo, was also added to the list due to the widespread artisanal small-scale gold mining there.

Most practitioners of this craft use mercury in the extraction process, and contribute to a large portion of global emissions of the hazardous metal each year.

This year's list also includes Hazaribagh in Bangladesh, which is home to most the country's 270 registered tanneries.

Every day, they collectively dump around 22,000 cubic litres of toxic waste, including cancer-causing hexavalent chromium, into the Buriganga, Dhaka's main river and key water supply.

The Niger River Delta in Nigeria and the Matanza-Riachuelo River Basin in Argentina were also added to the list.

Several toxic industrial areas in the former Soviet Union, including the site of the devastating 1986 nuclear disaster in Chernobyl, Ukraine, were carried over from the last list, as was Zambia's lead-mining city Kabwe.

Unlike the list six years ago, which was dominated by Chinese and Indian sites, those two countries are missing from the list published Monday.

"There has been a reasonably strong movement towards clean-up in India and China," Hanrahan explained.