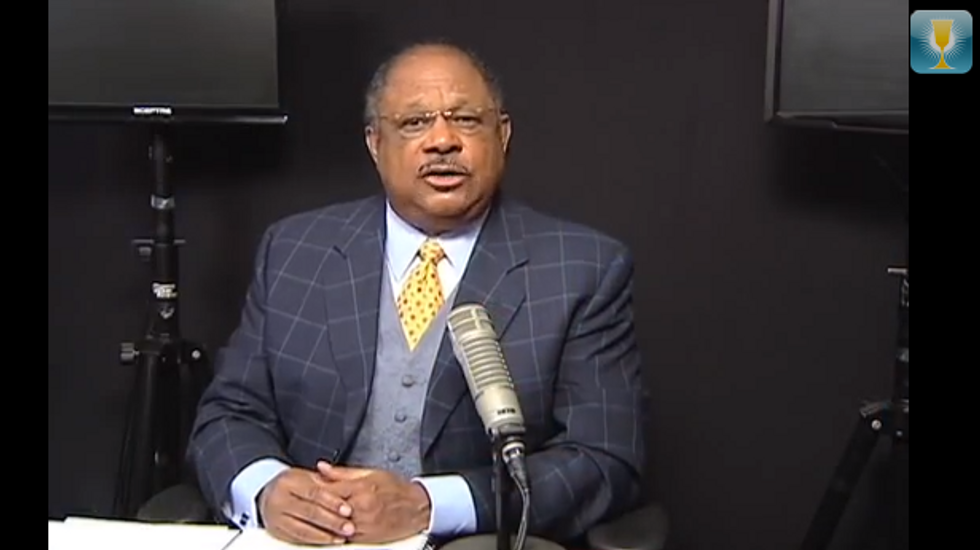 A birther preacher is pushing the conspiracy theory that Miriam Carey, who was shot to death Oct. 3 after police said she tried to ram her car into a barrier outside the White House, was the mother of President Barack Obama’s illegitimate child.

Rev. James David Manning, pastor of Atlah World Missionary Church who believes the president was born in Kenya, claims that Carey’s family has called for a paternity test to determine whether the woman’s 15-month-old daughter was fathered by the president.

While Carey’s family has indeed asked U.S. Attorney General Eric Holder to look into the fatal shooting, the only source for the claim about the family’s request for a paternity test seems to be additional videos posted online by Manning.

In fact, an attorney for the family issued a statement Sunday denying Manning's claim.

"There is no suggestion, nor has there ever been any suggestion by the Carey family that President Obama is the child's father," said attorney Eric Sanders.

He also links to a Change.org petition purportedly set up by Carey's sister asking for more investigation, but that too fails to mention a paternity test.

Eric Sanders, an attorney for the Carey family, has said police violated their own policies by firing at a moving car after they said the woman refused to stop at a security checkpoint, turned around and tried to flee, knocking down a Secret Service agent and a bicycle rack.

But he stopped short of suggesting that authorities had deliberately targeted Carey or that she might have had a connection to Obama.

That only serves as proof of a conspiracy and cover-up, according to Manning.

“No one has come to the aid of this slaughtered woman, which means they are protecting something that they feel is far more important, and that’s the hardcore, incontrovertible evidence and that which is being protected is Barack Hussein Obama,” Manning said, adding: “Case closed.”

Manning, who has previously hosted a woman on his program who claimed that Obama had traded gay sex for cocaine as a teenager and bummed cigarettes without offering thanks, isn’t the only source for the “love child” theory.

A website called What Does It Mean? claims that Russian authorities have developed intelligence showing that Obama fathered Carey’s child during an emergency dentist visit May 18, 2011.

According to the theory, Obama had gone to New London, Connecticut, to address the graduating class at the U.S. Coast Guard Academy but needed dental work after a portion of a pistachio nut shell became lodged in one of his molars.

The president met Carey, who worked as a dental assistant for the local dentist he saw, and struck up “an almost immediate friendship” with her.

She became pregnant following the affair, the website claims, but refused the president’s instructions to have an abortion due to her Christian beliefs.

The site claims that encrypted electronic communications intercepted by the National Security Administration show that an elite hit squad was dispatched to kill Carey.

This same squad also attacked the U.S. Navy Yard in September and in June killed American journalist Michael Hastings and detectives investigating his death, according to the conspiracy theory.

Just in case the theory wasn’t convoluted enough, the site also claims that Obama engaged in the extramarital affair because his wife, Michelle Obama, was in fact born a man.

The source for the last claim appears to be based on a report on a satirical site.

Police were called to her condominium four times for reports of irrational or violent behavior, and a police officer was injured during a late 2012 confrontation with her.

Officers said she told them in November 2012 that some men were filming her in her home, but police found no evidence of spying.

They said she told police two weeks later that she was the “Prophet of Stamford” and that Obama had placed the entire state under lockdown after speaking with her.

Police also said she told them that Obama had placed her home under electronic surveillance and fed live video of her actions to all national news outlets.

Updated Wednesday to include comments by the Carey family's attorney.

On Wednesday, the Lincoln Journal-Star reported that Chris Baker, a right-wing talk radio host for KFAB in Nebraska, posted a racist image in response to the murder and manslaughter conviction of former Minneapolis cop Derek Chauvin for the death of George Floyd.

"The tweet was posted within about an hour of the Derek Chauvin verdict and was headlined: Guilty!" reported Nancy Gaardner. "Beneath the headline was a GIF (file image) of four dancing older Black native men in loincloths, with body paint and possibly spears." According to the article, KFAB's parent company iHeartMedia is investigating to incident.