Brazil will use damaged World Cup stadium despite workers' deaths 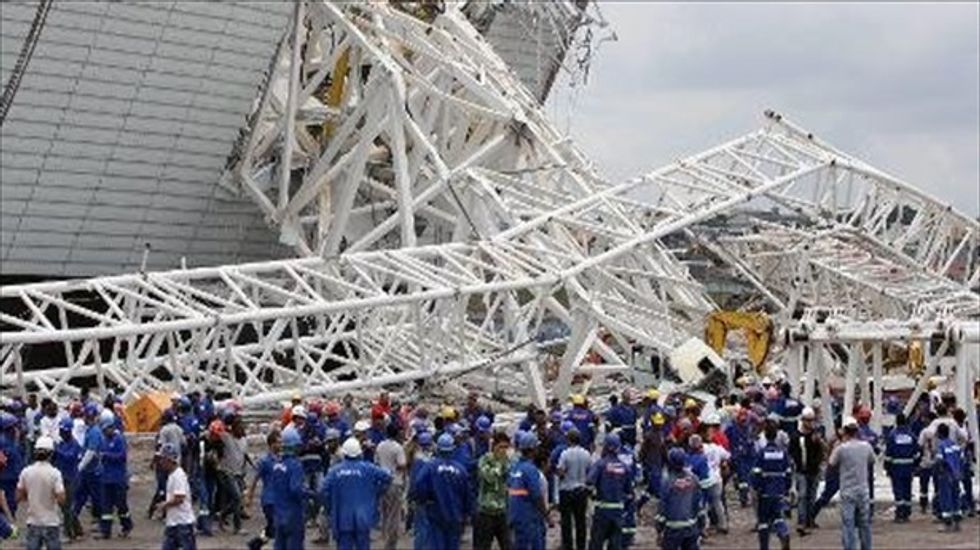 Workers stare at damages after a crane fell across part of the metallic structure at the Arena de Sao Paulo --Itaquerao do Corinthians-- stadium, still under construction, on Nov. 27, 2013 [AFP]

A Brazilian stadium will not be removed from the World Cup roster despite a deadly construction accident but its completion will be delayed, officials said Thursday.

The Arena Corinthians in Sao Paulo is slated to host the opener of the football extravaganza in June. On Wednesday, two workers were killed there when a crane collapsed and crushed them.

"Accidents occur. I very much deplore the deaths, but I am absolutely convinced that the Cup will open" in Sao Paulo on June 12, said Jose Maria Marin, president of the Brazilian Football Confederation (CBF) and the Cup's Local Organizing Committee (COL).

Ricardo Trade, COL's director general, echoed those remarks, telling the daily Estado de Sao Paulo that the Arena Corinthians "will not be excluded from the Cup."

One of 12 Brazilian host venues for the football extravaganza, the stadium is also expected to host five other games, including a semi-final.

The accident came amid a scramble to meet a firm December 31 deadline set by football's governing body FIFA to complete the dozen arenas.

Work at Arena Corinthians has been suspended until Monday for three days of mourning, after which 30 percent of the site will be closed for an investigation into the matter.

Brazilian press reports, citing anonymous sources, said the incident could result in a delay of one to two months in construction of the arena, which is 94 percent complete.

Officials, however, were divided on timing.

"It is impossible to make any prediction at this time as to whether the accident will cause a delay. In any case, we cannot imagine that if there is a three-month delay, the stadium will be excluded from the World Cup," Trade said.

But Jose Roberto Bernasconi, president of Brazil's union of architects and engineers, Sinaenco, said "surely the work will be delayed."

"We have to clear the rubble, the damaged pieces, the crane structure, clean up ahead of a thorough inspection to check whether or the structure was affected," he said.

According to civil defense officials, architects and engineers involved in the project, the accident did not affect the stadium's overall structure.

Police and civil defense officials inspected the site Thursday where the two workers, aged 44 and 42, were crushed to death when a crane hoisting a 420-ton metallic segment to the top of the roof collapsed.

Officials from the labor ministry and construction labor unions were also present.

The unions are pushing for a 30-day suspension of work pending completion of the investigation.

Sao Paulo prosecutors, meanwhile, served notice that the work will be completely suspended "if technical elements point to a need to do so."