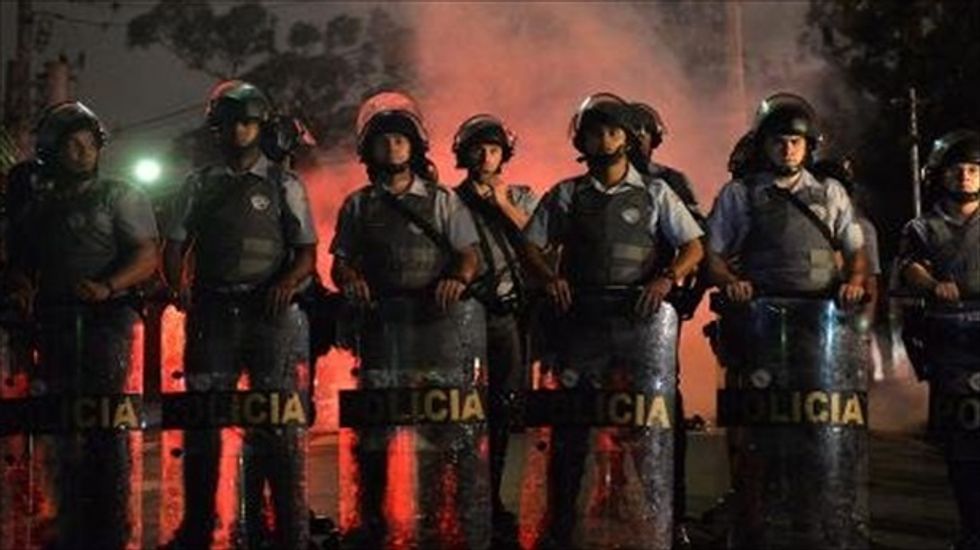 Riot police prepare to clash with demonstrators for the 'Teachers' day' protest on Oct. 15, 2013, in Sao Paulo, Brazil. [AFP]

Some 100 demonstrators protesting the forced eviction of squatters clashed with police in Sao Paulo Friday in a fresh outbreak of violence in Brazil's biggest city.

A police spokeswoman said the disturbances erupted in a shantytown of northeastern Sao Paulo over the clearance of lands illegally occupied by squatters.

Local authorities said they were seeking a peaceful solution to the dispute but squatting families said they will be evicted this weekend with nowhere else to go.

In recent days, violent protests have flared across this sprawling metropolitan area of 20 million after two black youths were shot and killed by police.

Monday, dozens of angry youths were arrested, one bystander suffered gunshot wounds, stores were looted while six buses and three trucks were torched.

More than a million Brazilians took to the streets in June, angry at substandard social services, endemic corruption and the millions of dollars being spent on staging next year's World Cup and the 2016 Rio summer Olympics.

The social turmoil began in Sao Paulo, which will host the opening game of the World Cup next June 12.