Bribery, prostitution and a U.S. Naval officer's fall from grace 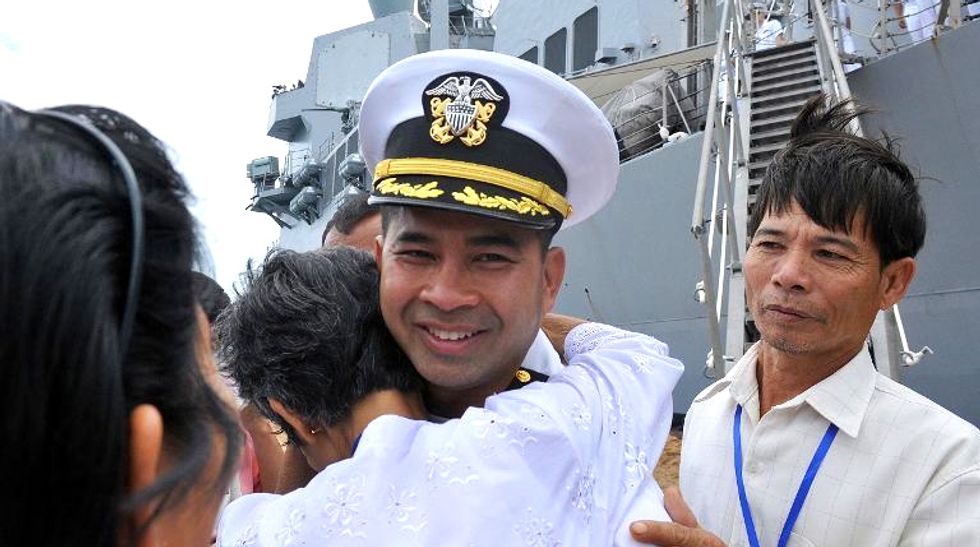 He had an empathetic story that seemed to embody the American dream, and the US Navy was eager to tell it.

Born in the rice fields of Cambodia outside Phnom Penh, Michael Vannak Khem Misiewicz was sent away as a boy to the United States, given up for adoption to save him from the civil war with the genocidal Khmer Rouge.

Thirty-seven years later, Misiewicz returned to the former killing fields in the spotless white uniform of a naval officer, as commander of an American destroyer, the USS Mustin.

As he stepped off the warship, he was met by his aunt and other relatives in an emotional reunion captured by a Pentagon photographer and a gaggle of reporters.

His triumphant return in 2010 was heavily promoted by the Navy's public relations department, and he was one of several officers of Asian heritage whose port visits were intentionally high-profile.

But Misiewicz's rising star status has come crashing down as he faces corruption charges from federal prosecutors in the Navy's biggest scandal in years.

He and several fellow officers stand accused of divulging confidential ship movements and diverting US vessels to ports favored by a Singapore-based contractor, Glenn Defense Marine Asia (GDMA), which then allegedly overcharged to provide food, fuel and other supplies to the ships.

Misiewicz, 46, has pleaded not guilty to charges of conspiracy to commit bribery, which carries a maximum penalty of five years in prison.

Those who knew the Cambodian-American officer say they are stunned by the allegations and had no inkling of a possible scandal. But they are reluctant to speak publicly about the case that has yet to go to trial.

"I am still hoping it's not true," wrote one colleague on an anonymous online forum for sailors.

"I worked closely with Mike for a year when he was in command and these charges are so out of character for what he displayed every day that I'm in a state of disbelief."

But others vented their disgust on the site, bashing him as a man of "low character" and "low intellect" who dishonored his uniform.

At the end of his tour as skipper of the Mustin, Misiewicz was cultivated by a rotund Malaysian businessman named Leonard Francis, known by American officers as "Fat Leonard," GDMA's chief executive.

Francis, according to federal prosecutors, wanted to make sure Misiewicz would give his company special treatment when he started his new job as deputy chief of operations with the 7th Fleet.

Misiewicz was given tickets to take his wife to a performance of the musical "Lion King" in Tokyo. Francis paid for sumptuous luxury suites at the Shangri-La hotel in Singapore. Prostitutes were arranged, according to court documents.

Soon, Misiewicz was referring to Francis as "Big Brother" or "Big Bro" in his emails, and Francis called him Little Bro or "LB," according to prosecutors.

Misiewicz would send the businessman classified schedules for ship visits and then Francis would push the naval officer to direct the vessels to be resupplied at "pearl ports" in Malaysia and Thailand, where GDMA allegedly could charge more for its husbandry services.

"Bro, I need more visits please in Pearl Ports," the CEO wrote in one email.

In the same message, he confirms to Misiewicz that he has extra tickets for a Lady Gaga concert, and suggests more than one show is in the works.

"Who are the new players on the team I need to line up the Targets..." Francis wrote in an alleged reference to prostitutes.

Prosecutors say Misiewicz succeeded in shifting some ships to the ports preferred by Francis, including arranging for the aircraft carrier John Stennis to stop in Sepanggar in Malaysia.

GDMA charged the US government $2.7 million for husbanding services for the Stennis, but carrier visits to other ports in Malaysia usually cost only about $1.36 million, the charge sheets said.

When he was commander of the Mustin, Misiewicz's visit to Cambodia was seen as a "good news story" for the Navy, officials said.

The event was part an orchestrated media campaign to highlight officers of Asian heritage, including one whose family had fled Vietnam.

But Misiewicz's tale has taken on a new light with the bribery case, and highlighted the close ties between the Navy and a certain rotund, well-connected Malaysian businessman.

"One of my most epic nights on liberty involved Fat Leonard," one sailor wrote in an anonymous post. "Suppose it was just a matter of time."