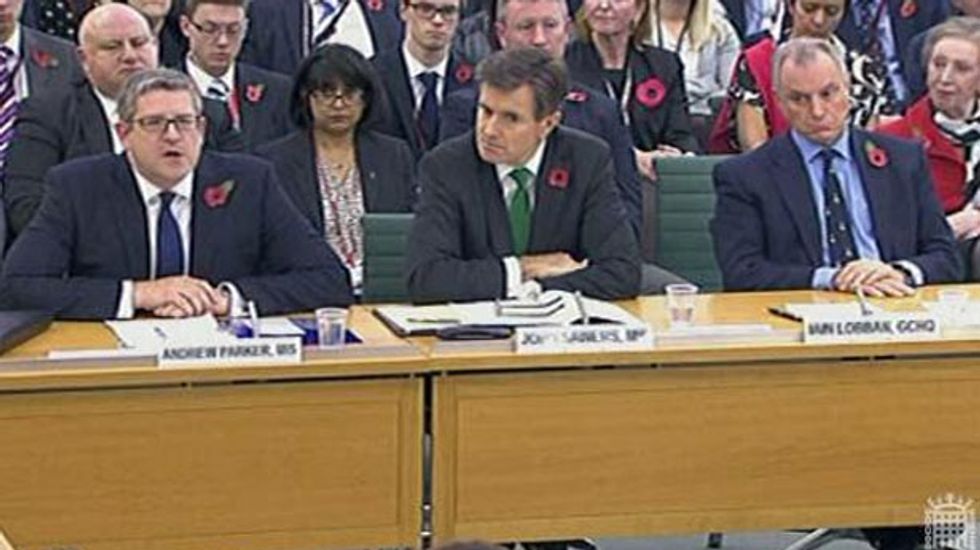 Britain's top spy chiefs said in a rare televised appearance Thursday that the intelligence leaks by Edward Snowden have left its enemies "rubbing their hands with glee" and caused terror groups to change the way they communicate.

The heads of foreign spy agency MI6, its domestic counterpart MI5 and electronic eavesdropping agency GCHQ also denied in their evidence to parliament's Intelligence and Security Committee that Britons were subject to mass surveillance.

In a hearing held under tight security and with a two-minute time delay to prevent accidental disclosures, MI6 boss John Sawers said Snowden's revelations of mass US and British surveillance programmes were a gift to Al-Qaeda and other terrorists.

"The leaks from Snowden have been very damaging, they put our operations at risk. Our adversaries are rubbing their hands with glee. Al-Qaeda is lapping it up," Sawers told the committee.

GCHQ boss Iain Lobban added that the revelations by the fugitive US leaker had led "terrorist groups" in the Middle East, Afghanistan and elsewhere to modify the way they communicate.

"We have intelligence on (and) we have actually seen chat around specific terrorist groups, including closer to home, discussing how to avoid what they now perceive to be vulnerable communications methods," Lobban said.

Snowden, a former US National Security Agency (NSA) contractor who has been granted temporary asylum in Russia, has revealed massive US electronic surveillance programmes in recent months, sending shockwaves around the world.

The leaks have strained Washington's ties with its allies over suggestions that it has eavesdropped on dozens of world leaders, including by tapping the mobile phone of German Chancellor Angela Merkel.

Thursday's hearing marked an unprecedented joint public appearance for the heads of the three British intelligence agencies, who could be seen on television sitting in a row as they answered questions from lawmakers.

They insisted that they worked hard to balance national security with citizens' right to privacy.

"We do not spend our time listening to the telephone calls or reading the emails of the majority. It would not be proportionate, it would not be legal. We do not do it," Lobban told the committee.

MI5 director general Andrew Parker insisted that the work of the intelligence services was a "proportionate" response to the terrorist threats faced by Britain.

"The suggestion that what we do is somehow compromising freedom and democracy -- of course we believe the opposite is the case," Parker told the committee.

"The work we do is proportionate judged against the necessity of protecting against these threats."

"We're absolutely clear we only operate within the framework of the law," he told the committee.

"Would we pursue a situation that we knew would lead to mistreatment or torture of an individual to get terrorist threat intelligence? The answer is absolutely not.

"We do not participate in, incite, encourage or condone mistreatment or torture, and that is absolute."

The MI6 boss identified "al-Qaeda and its many, many branches" as the biggest threat to British security.

"There are also states out there that are trying to do us harm, through cyber-attacks, by acquiring nuclear weapons or involved in generating instability in parts of the world important to us," he added.

The televised proceedings were subject to a delay to prevent any information that compromised national security from being accidentally broadcast, committee chairman Malcolm Rifkind said.

The three spymasters have until now given evidence to the committee in private because of the sensitive nature of their work.

GCHQ has faced questions in recent weeks because Snowden's leaks have suggested close collaboration between the British listening post and its US counterpart, the NSA, to harvest vast quantities of data from ordinary citizens' communications.

Britain has faced questions from Berlin this week following a media report that London has been operating a secret listening post from its Berlin embassy.

The German government called in Britain's ambassador for questioning over the report by Britain's Independent newspaper, which was said to be based in part on leaked documents from Snowden.