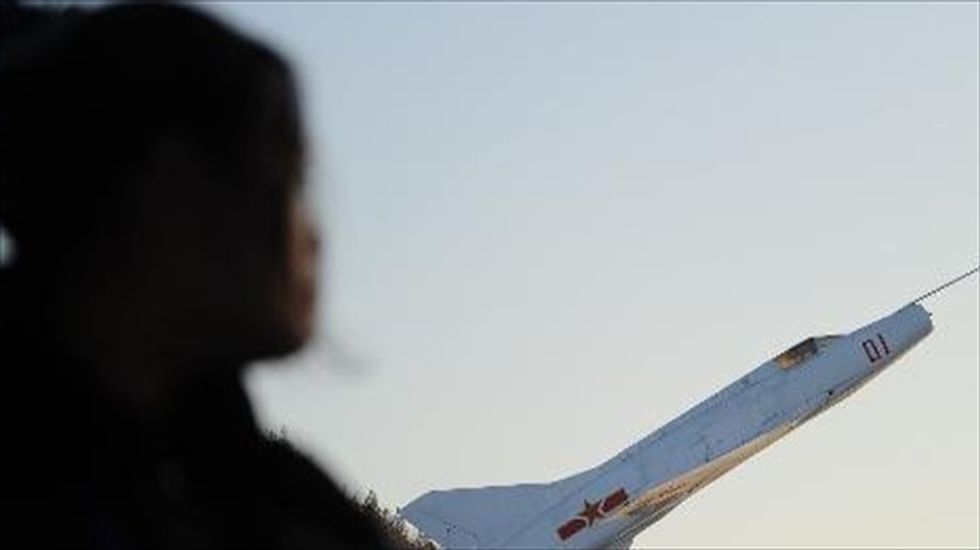 A woman walks near Chinese aircraft on display during a visit to a museum in Beijing on Nov. 29, 2013 [AFP]

Beijing's announcement last weekend of the air defence identification zone, which covers islands at the centre of a dispute between China and Japan, has raised tensions in the region.

The report indicated that Japan and the US are continuing to disregard Beijing's demands that aircraft submit flight plans when traversing the zone in the East China Sea or face unspecified "defensive emergency measures".

"We'll continue to partner with our allies in the region and operate as normal," Lieutenant-Colonel Erik Brine, a Pentagon spokesman, told AFP without elaborating.

The US, South Korea, Japan and other countries have accused Beijing of increasing regional tensions with its new air defence zone.

Shen said the air force had a mission to monitor foreign aircraft inside the zone "throughout the entire process, with timely identification".

Japan and South Korea both said Thursday they had disregarded the ADIZ, showing a united front after US B-52 bombers also entered the area.

But Beijing is facing considerable internal pressure to assert itself. China's state media called Friday for "timely countermeasures without hesitation" if Japan violates the zone.

Washington has security alliances with both Tokyo and Seoul, and analysts say that neither China nor Japan -- the world's second- and third-biggest economies, and major trading partners of each other -- want to engage in armed conflict.

The Global Times newspaper, which generally takes a more nationalistic tone than China's government, said in an editorial Friday: "We should carry out timely countermeasures without hesitation against Japan when it challenges China's newly declared ADIZ.

"If Tokyo flies its aircraft over the zone, we will be bound to send our plane to its ADIZ."

The paper, which is close to the ruling Communist party, said: "We are willing to engage in a protracted confrontation with Japan."

But it shied away from threatening Washington, which sent giant Stratofortress bombers inside the zone, issuing an unmistakable message.

"If the US does not go too far, we will not target it in safeguarding our air defence zone," the paper said.

The Communist Party seeks to bolster its public support by tapping into deep-seated resentment of Japan for its brutal invasion of the country in the 1930s.

Such passions are easily ignited, and posters on Chinese social media networks have urged Beijing to act, with one saying Friday: "Japan, US and South Korea jointly ran the red light on purpose, the Chinese government should take decisive measures to deal with them as a war of words won't solve any problems."

The media rhetoric came after Chinese planes conducted air patrols on Thursday, Xinhua said, after it first sent fighters, scouts and early warning aircraft into the zone on Saturday.

Both Japan and Washington have ADIZs of their own, and China accuses them of double standards, though China's zone includes a rock which is disputed between Beijing and Seoul, as well as islands controlled by Japan and claimed by China.

Japan denies that there is a dispute over the islands, and Chief Cabinet Secretary Yoshihide Suga declined Friday to be drawn on reports that a Chinese envoy had suggested setting up a mechanism to prevent mid-air incidents.

"Our country's principle is that we will assert our position firmly in a stern but calm manner," Suga said. "And we keep the window of dialogue open."

The Yomiuri Shimbun reported that the US and Japan planned to enhance military cooperation in the area, with Tokyo permanently stationing E-2C early-warning planes in Okinawa, and US Global Hawk unmanned drones expected to be operated from Japan soon.

The European Union added its voice to the criticism of the zone on Friday, with its top foreign affairs official Catherine Ashton saying it "contributes to raising tensions in the region".

At a regular briefing Chinese foreign ministry spokesman Qin Gang dismissed her remarks, saying: "Ms Ashton knows that within the EU, some countries have ADIZs, so I don't know if that means the situation in Europe is getting more tense."

US Vice President Joe Biden is visiting the region next week, and administration officials said that while in Beijing he will raise Washington's concerns about the ADIZ, and China's assertiveness towards its neighbours.

The Philippines has voiced concern that China may extend control of air space over disputed areas of the South China Sea, where the two nations have a separate territorial dispute.