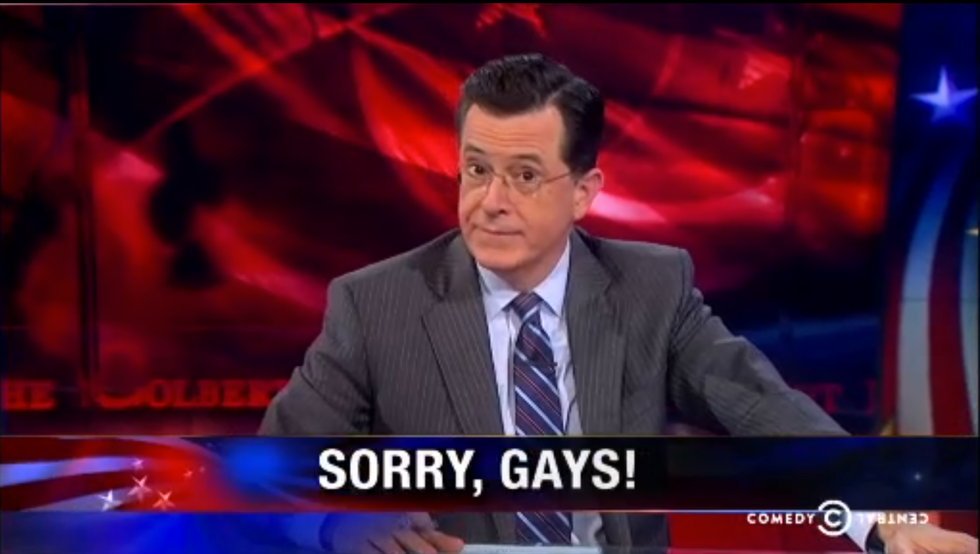 Stephen Colbert said a recent report about insects having “accidental” homosexual relations had caused him to rethink his views on human homosexuality.

Scientists have observed that up to 75 percent of insects engage in same-sex interactions, but a recent study found that those relationships may be accidental.

“That’s a relief,” said Colbert on Tuesday night’s program. “It’s all just one big misunderstanding, and I’m not surprised. Bugs are always getting it wrong. I mean, look at the birds and the bees. Hey, bees: Stop screwing those birds. They’re not giant bees.”

The host of "The Colbert Report" showed a clip from a National Geographic program about bees competing for mates, and one male attempts in haste to mate with another male.

“There’s nothing gay there,” Colbert said. “It’s just a normal, manly desire to bang everything that moves, and once we get going, once we’re going down that road, we never ask for directions. Am I right, ladies?”

Colbert said the study had changed his mind about gay sex.

“Folks, set your VCRs to record your Tivos, because tonight I am issuing a rare and historic apology,” Colbert said. “The gays: I am sorry. For years I have considered man-on-man sex a deplorable, unholy abomination. Girl on girl? Hey, I’m not dead.”

He said the insect study had showed him that gay men weren’t born with an attraction to other men, but that gay sex was the result of some “attraccident.”

“Maybe you met someone nice, went on a couple of dates, made you laugh, smelled good, one thing led to another, and you’re back at your place going, ‘Hey, this person having sex with me is a guy,’” Colbert said. “But out of politeness you don’t say anything.”

Colbert suggested that, afterward, months might pass, and then the couple might introduce one another to their families.

“When they ask why your girlfriend is a guy friend, you blurt out: ‘I meant to do this!’” Colbert said. “Because even marrying a dude is less embarrassing than admitting you didn’t bother to check under the hood.”