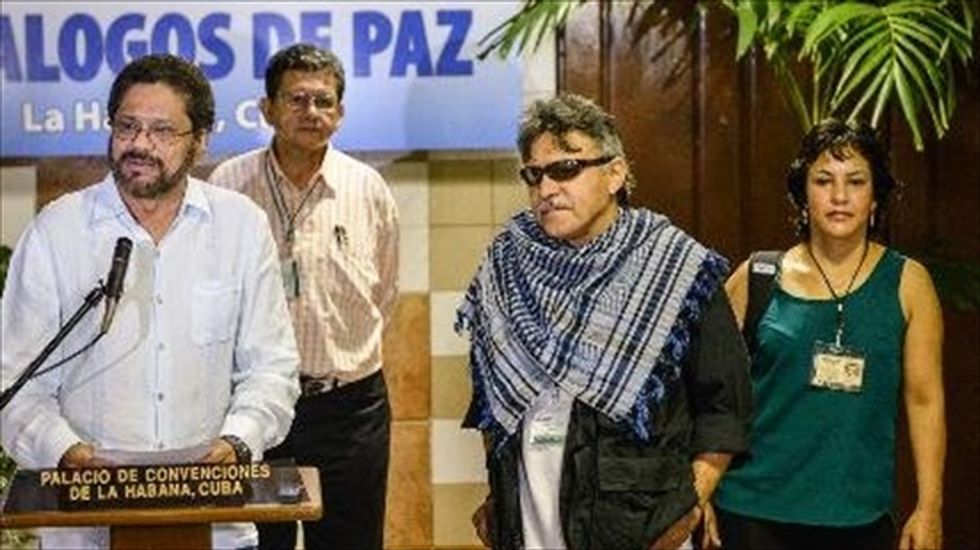 "We saw ourselves forced to set up a system of fiscal contributions and transaction regulations with the farmers, taking into consideration their rights and protecting them from abuse from intermediaries and drug traffickers," they said in a statement.

The remarks by the Revolutionary Armed Forces of Colombia came on the second day of a renewed round of peace talks with the government aimed at ending their near 50-year conflict.

Considered Latin America's longest-running insurgency, it has left hundreds of thousands of dead and displaced more than 4.5 million people.

Currently on the agenda at the talks, which began more than a year ago and are being held in the Cuban capital Havana, is ending drug trafficking in the country.

The discussions resumed Thursday after a three week break amid differences over coca cultivation, blamed by political leaders for drug-linked violence and killings.

"We want a country without cocaine but we are aware that this depends in particular on rules imposed at a global level by all countries that, in one way or another, are implicated," said the statement read to reporters by chief FARC negotiator Ivan Marquez.

"Instead of directly attacking the structural causes of coca cultivation, the Colombian government has completely aligned itself with the imperialist strategy of the United States and the 'war on drugs,'" he added.

The FARC also rejected allegations they were "narco-guerrillas" and pursued "narco-terrorism" by claiming these accusations came about due to "a need by the right to find a new enemy after the disappearance of the Soviet bloc."

"At first, there was talk of 'narco-guerrillas' and then, once the terrorist discourse had established itself, the term 'narco-terrorism' emerged," the FARC said.