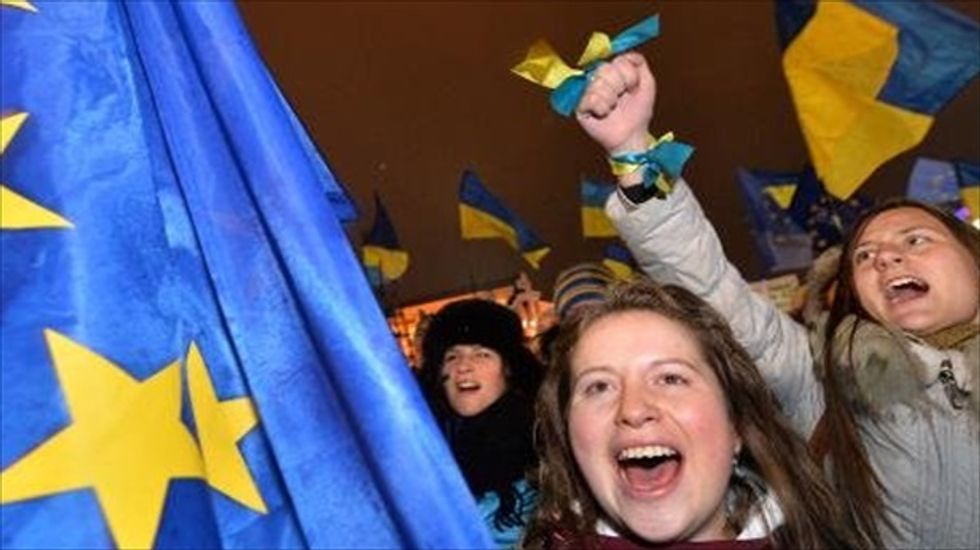 Ukrainian students shout 'Sign on!' during a mass rally on Independence Square in Kiev on Nov. 28, 2013 [AFP]

A European Union bid to draw mighty ex-Soviet state Ukraine into the Western fold headed for failure at a summit ending Friday held amid a worsening EU-Russia tug-of-war.

Lithuanian President Dalia Grybauskaite told AFP that leaders of the 28-nation-bloc had failed to convince Ukrainian President Viktor Yanukovych to sign up to a landmark political and trade deal that had upset former master Moscow.

The two-day summit held in the Lithuanian capital on the EU's eastern flank was to have celebrated a five-year drive to cement ties between the 28-nation bloc and six former Soviet states in eastern Europe and the Caucasus -- Belarus, Ukraine, Moldova, Georgia, Armenia and Azerbaijan.

But under mounting economic pressure from Moscow, Ukraine's President Viktor Yanukovych just days before the summit scrapped plans to sign a political and free trade deal with the EU that was to have been the event's crowning moment.

"There was no progress," said a diplomat speaking on condition of anonymity. Yanukovych had requested extra EU funds to help the nation's struggling economy and demanded three-way talks between the EU, Russia and Ukraine on trade.

The EU however has repeatedly refused to even consider trilateral talks on trade, with one senior EU official saying this week "it would be like inviting China to the table at talks to agree an EU-US free trade deal".

Kiev's surprise decision to scrap the landmark accord with the EU has unleashed a war of words between East and West recalling Cold War days and sparked some of the biggest protests seen in Ukraine in a decade.

Brussels says the deal is "still on the table" despite the rebuff and Kiev says it could even still sign it.

As pro-EU Ukrainians took to the streets demanding Yanukovych side with the West and turn away from Moscow, even his arch-foe, jailed former premier Yulia Tymoshenko, said she would rather stay behind bars than see the country go East.

EU nations concerned that Ukrainian opposition politicians are increasingly targeted by prosecutors had asked she be released for medical treatment abroad.

Tymoshenko's daughter Eugenia told AFP that if Yanukovych "fails to sign the agreement tomorrow, we cannot predict how people will react".

Keen to show Moscow's former communist satellites in Eastern Europe that the summit matters, almost all EU leaders were attending the two-day talks, including the "Big Three" of Britain, France and Germany.

The accent is on the future, they argue, rather than the past.

"We should overcome the mentality 'either us or them.' The Cold War is over," German Chancellor Angela Merkel said, admonishing Russian President Vladimir Putin to look at the wider picture.

The Eastern Partnership summit also includes Armenia, Azerbaijan, Georgia, Moldova and Belarus, aiming to strike trade and aid deals with the EU but vast Ukraine, with its 45 million people, industry and farms, is the major prize.

To make matters worse, Brussels has also seen Armenia, Azerbaijan and Belarus turn back towards a Moscow which has reminded all of how much they stand to lose if they make what it sees as the wrong choice.

Only Moldova and Georgia -- which fought a brief war with Russia in 2008 -- are now ready to initial agreements with the EU but Moscow could well apply pressure on them too before the deals are formally signed in around a year.

"Russia has already begun to increase pressure on these states as well," said global think-tank Stratfor.

Yanukovych insists the EU offered insufficient compensation to offset what Ukraine might lose in economic ties with Russia.

Brussels says that after months of arm-twisting by Moscow, Ukraine's exports to Russia dropped 25 percent, in some industries by 40 percent. Ukraine is also heavily dependent on Russia's natural gas.

The EU has come under stiff criticism for its handling of negotiations with Yanukovych, seen as having played both sides in his own interest of winning elections in 2015.