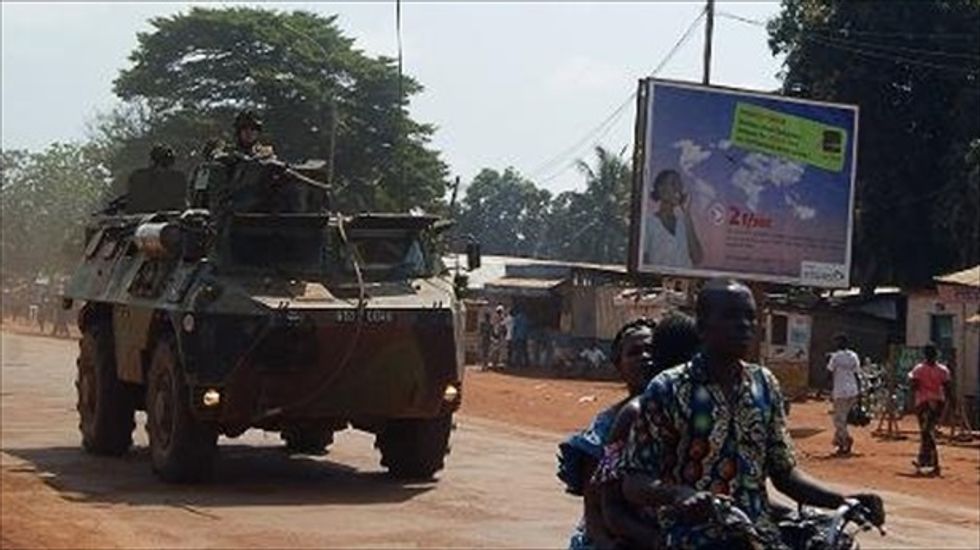 French troops have begun to deploy to the strife-torn Central African Republic, airlifting men and equipment to Bangui in preparation for an intervention to restore order, an airport source said.

"French military aircraft have made several round trips in the past few hours coming mainly from Gabon, to bring in supplies," the source told AFP, asking not to be named.

Paris on Monday presented the UN Security Council with a draft resolution aimed at reinforcing a regional African military mission in the CAR (MISCA), with the goal of turning it into a UN peacekeeping force. French envoy to the United Nations Gerard Araud has said the resolution could be passed next week.

"Many patrol vehicles and troop transports, (including) light armoured vehicles, have arrived from Cameroon by road and headed directly for the M'poko military base," which is MISCA headquarters near the capital, a Central African military source said.

"Ground reconnaissance missions and joint patrols are being carried out right now by teams of (French foreign) legionnaires and men from the 410-strong (French) force already located in Bangui," the source added.

The CAR, a deeply poor landlocked nation prone to coups, insurgencies, banditry and mutinies, plunged into chaos after a rebel coalition known as the Seleka (Alliance) ousted president Francois Bozize on March 24.

The rebels opened the way for one of their leaders, Michel Djotodia, to become the first Muslim president of the Christian majority nation. His accession to power was grudgingly acknowledged by other African leaders in exchange for a political transition to democracy.

Djotodia has offically disbanded the Seleka, but the motley crew of mostly Muslim insurgents have taken to looting and burning villages, killing inhabitants who fail to flee, according to Human Rights Watch (HRW) and other watchdog bodies.

In response, Christian populations have formed militia forces that attack Muslims, who are "often traders or nomads who have nothing to do with Seleka," French researcher Roland Marchal said.

Le Drian stressed that the French intervention had "nothing to do with Mali", where Paris sent troops in January to quash an insurgency by Al-Qaeda-linked groups. In the CAR, the issue "is the collapse of a state and a trend towards religious confrontation," he said.

More and more French military vehicles were to be seen on the streets of Bangui, with a visible troop presence. The arrival of French soldiers was being widely discussed and spurred hopes.

"I'm convinced that France will not accept all these atrocities. It will put an end to all that and boost the (political) transition on a new basis and with renewed vigour," a Central African former diplomat told AFP, asking not to be named.

In the capital as well as the interior of the country, the repeated crimes committed by ruthless bandits have reached a scale that could tip the country into civil war, according to some analysts.

In Paris, HRW's French director Jean-Marie Fardeau on Tuesday denounced a "criminal strategy" on the part of armed groups who take advantage of the chaos to carry out "raids and massacres", in the CAR, but stated that "the term 'genocide' is not apt".

France's resolution before the UN Security Council provides for the creation of a fund to finance the MISCA force, which is currently 2,500 strong, on the way to being reinforced to a planned 3,600.

While calling politically for the "rapid implementation of the transitional accords" ahead of free and fair elections, the draft "authorises French forces" in the CAR "to take all measures needed to support the MISCA".