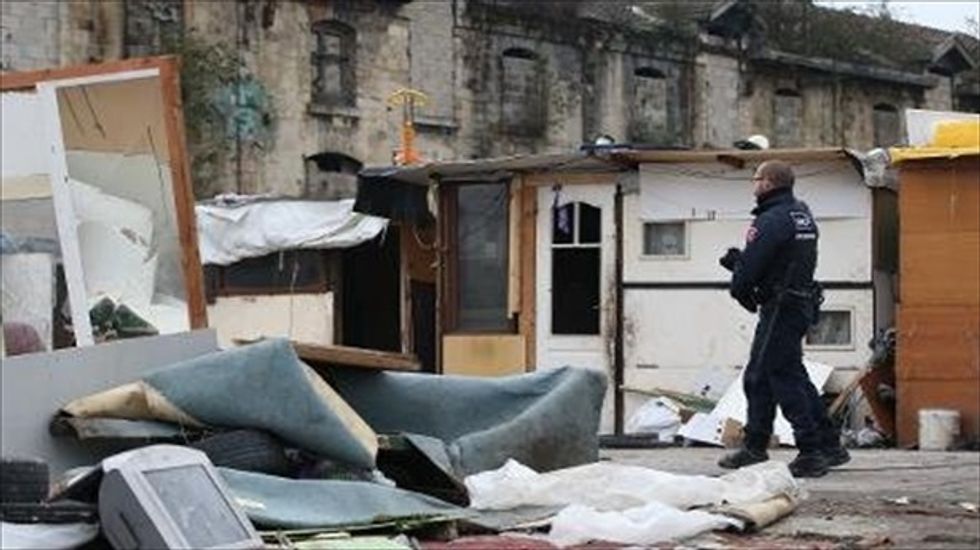 A security agent of French state-owned railway company SNCF stands in a camp, where some 800 people of the Roma community were living, following its evacuation by policemen, on Nov. 27, 2013 [AFP]

French authorities on Wednesday cleared one of the country's largest Roma camps, evicting some 800 migrants from a shantytown north of Paris.

France has in recent years pursued a controversial policy of evicting Roma migrants from camps outside major cities, often paying them to return to their countries of origin, mainly Romania and Bulgaria.

About 300 police converged on the camp early Wednesday in Saint-Ouen in the northern suburbs of Paris.

Warned in advance of the eviction, many residents had already fled the camp. But about 250 remained to be cleared from wooden shacks, including about 70 children.

"I don't know where I'm going to go," said Cassandra Punca, a 22-year-old mother of four originally from Bucharest who lived in the camp for three months. "We have no money, we came to France to be able to eat."

Officials said a handful of those evicted would be put up in temporary housing for the night but that most were expected to move to other Paris-area Roma camps.

The camp had been set up on land owned by France's state-run SNCF rail service and declared illegal by the local mayor's office.

A Roma rights group, La Voix des Roms, denounced the eviction as "an operation of great brutality" that "throws several hundred people on to the streets at the start of winter".

The government estimates there are between 15,000 and 20,000 Roma migrants in France, with most living in such shantytowns or on the streets.