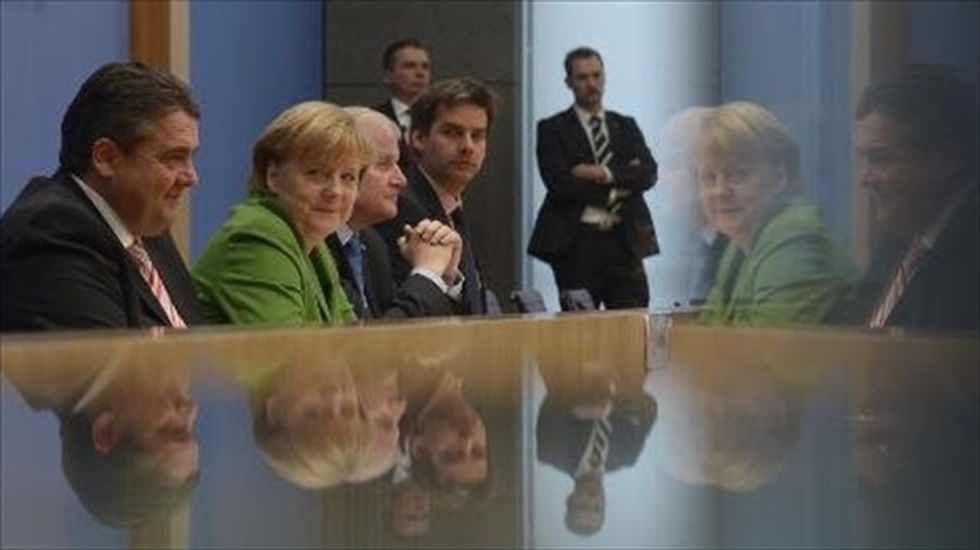 The tall 51-year-old with closely cropped hair once ran his own security firm with 36 employees.

But for the past seven years, he has been scraping by, earning just 7.71 euros ($10.5 dollars) an hour as a guard with a major security firm in Frankfurt.

"It's difficult to get by," Schleiffer said, without a hint of self-pity.

And he is just one of 5.6 million people who earn less than the hourly 8.50 euros that will be Germany's fixed minimum wage.

It was part of a deal hammered out overnight by Chancellor Angela Merkel's conservatives and the Social Democrats (SPD) to form a new left-right "grand" coalition government.

But those days proved short-lived, thanks to cut-throat competition in the sector and a falling out with his former business partner.

The money and work troubles cost him his marriage.

He was on the dole for 18 months, doing odd jobs here and there, during which he sent off more than 100 job applications.

"I was over-qualified," he fumed.

Finally, he got a job at his current firm, beginning at 7.23 euros per hour.

"I wanted to get back into work as soon as possible. The pay was less than I'd hoped. But I took it because there are people out there who work for even less," he said.

His wages have gone up only fractionally since then. After paying his debts, his rent for a tiny two-room flat and other costs, he has just 500 euros a month to feed and clothe himself.

"I can only shop in the discount supermarkets. I never go to the cinema or on holiday. I don't have any money to set aside. And I'm not allowed to run up an overdraft. On top of that, I have to support my new girlfriend and pay for my daughter's schooling," he explained.

A committed member of the giant services sector union Verdi, Schleiffer said he is in favour of a fixed minimum wage.

Under the coalition deal, a national minimum wage of 8.50 euros an hour, which was a deal-breaker for the SPD, will take effect from January 1, 2015.

"It's good news. I hope I'll be able to live a bit more normally," he said.

But he is careful not to get his hopes up too high.

"You always hope that the end of the crisis is in sight. But in reality, it's a lot more difficult than it seems."

A nationwide fixed minimum wage "won't solve all the problems. Rents are going up. I'll have to pay more tax. And even 8.50 euros an hour is difficult to live on in Germany," he said.

And next year will be an important one for him.

"By the end of 2014 I should have finished paying off my debts. After that, I want to start again, but take it carefully," Schleiffer said, adding that his dream is to work as a detective or be his own boss once again.