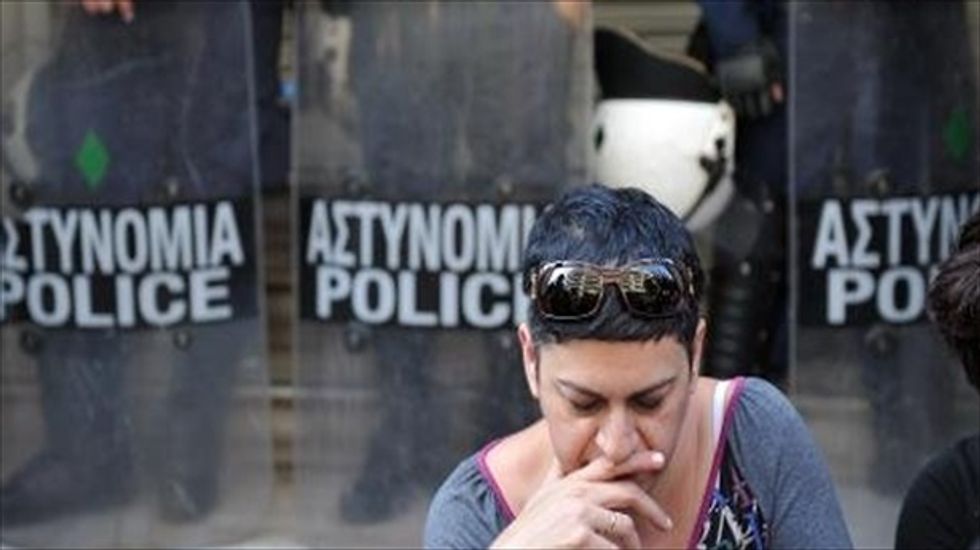 Police officers stand guard in Athens during a 24-hour strike by health workers to protest the government's proposed reforms of public health services, in Athens, on Nov. 1, 2013. [AFP]

"We will not let democracy succumb to criminal violence under any circumstances," Samaras told Mega television channel in an interview. "We will be relentless against those responsible."

On Friday, two armed assailants riding a motorbike shot dead two members of Golden Dawn and seriously injured a third one in a shock drive-by attack outside the party's offices in an Athens suburb.

Experts fear the attack could spark further violence, as it followed the September assassination of an anti-fascist rapper by a Golden Dawn member.

So far no one has claimed responsibility for the double murder and Greece's anti-terrorist squad is searching for the assailants who remain unidentified.

Samaras warned that Greeks had to stand united to address the economic crisis still gripping the nation, three years after it narrowly avoided bankruptcy with the aid of EU-IMF loans.

The premier said the double murder was "like lighting a match in a powder magazine, at a moment when we have so many other fires, economic (fires) before us."

"Severity from the state and a mood for unity are needed," Samaras said.

Mission chiefs from the European Commission, the International Monetary Fund and the European Central Bank -- the so-called troika of creditors -- will on Tuesday embark on a new round of talks with Greek officials.

The troika's report is necessary to unlock a vital one-billion-euro ($1.3 billion) disbursement of financial aid from the country's rescue loans.