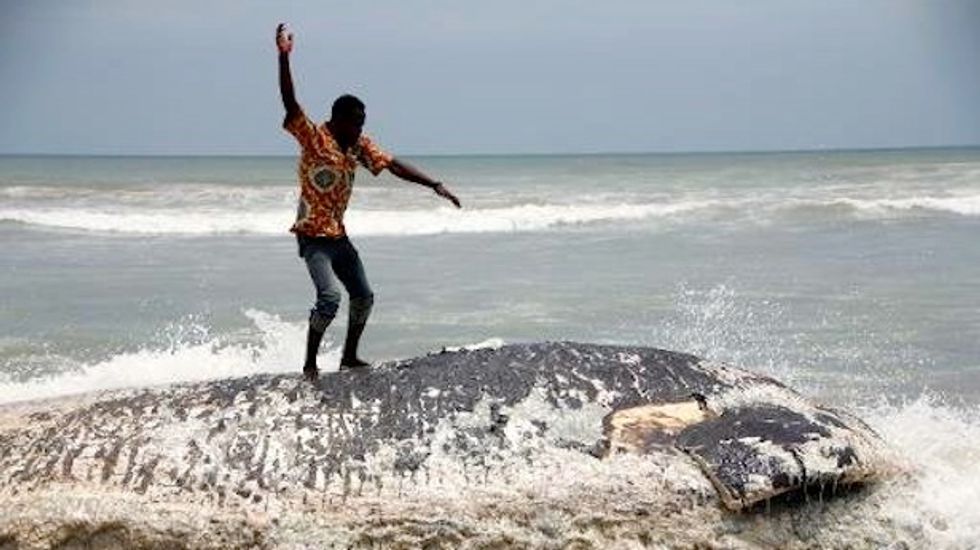 Decomposed whale carcasses have been washing up on beaches in Ghana's oil-producing west, raising the ire of environmental groups worried the country's growing petroleum industry may be killing marine life.

A total of 20 dead whales have been discovered along Ghana's coastline in the last four years, including at least eight since September.

What killed the marine mammals remains a mystery.

But environmental groups say they are concerned, given the proximity of the discoveries to the country's new offshore petroleum industry.

"The fears are rising as to what is killing the ... whales," said Kyei Kwadwo Yamoah, program co-ordinator for Friends of the Nation, an environmental group that tracks the deaths.

People living along the coast "want to know so they can rest assured if it would have impact on them or if it wouldn't", he added.

Last week, the 20th whale carcass found since 2009 washed up on a remote beach in Western Region, where Ghana gets most of its oil, Yamoah said.

Oil production did not start until 2010 but Yamoah said exploration intensified the year before.

Friends of the Nation and other environmental groups raised the alarm in September, when five decomposed whales were discovered in Western Region and near the capital Accra in the space of a week. In October, two more bodies were found in Western Region.

Ghana produces about 115,000 barrels per day, mostly from the Jubilee field off the coast of Western Region's Cape Three Points, where the latest dead whale was found.

The west African nation has been trying to avoid the mismanagement and pollution that has plagued other regional oil giants like Nigeria, where billions of oil dollars have been lost through corruption and spills happen frequently.

Ghana's government, which has downplayed the whale deaths, is counting on the riches from oil production to build up the country's infrastructure and improve the economy. It could do without any environmental scandal.

At the EPA, spokeswoman Angelina Mensah said an investigation into the deaths was under way but did not respond to additional questions sent via email.

The EPA said after the discovery of the five dead whales last year that the situation was "of much concern" but it was not unprecedented.

"The incidence of whales being washed ashore is a global occurrence and not limited to Ghana," the statement said, adding that whales die frequently worldwide.

Last September, a scientific review panel determined that a 2008 mass beaching of whales in Madagascar was caused by the use of sonar by vessels exploring for oil.

But that was not necessarily occurring off the coast of Ghana.

"It has to be a more careful analysis than the convergence of industrial activity and carcasses washing up off beaches," Ramage said.

"That is certainly concerning and for some very compelling but isn't sufficiently convincing to allege that connection.

"In the case of the Madagascar instance, it took the convening of a panel."

Determining what, if anything, in Ghana's waters was responsible for the whale's deaths may prove difficult, said Peter Ziddah, a fish health specialist who has examined some of the carcasses.

Whales are usually badly decayed by the time they wash ashore and in some cases are beheaded by fishermen, according to local tradition.

"Looking at a rotting carcass, we can't determine anything," Ziddah said.

Other experts suggest that the cause could lie elsewhere.

Ghana is on a path of migration for whales heading from South Africa to the waters off Britain and with the current flowing east, whatever killed the whales could be off the coast of neighboring Ivory Coast -- or further east.

"It's definitely unusual. But what may be the cause we can't put our finger on," said A.K. Armah, a lecturer at the University of Ghana, who studies marine life.