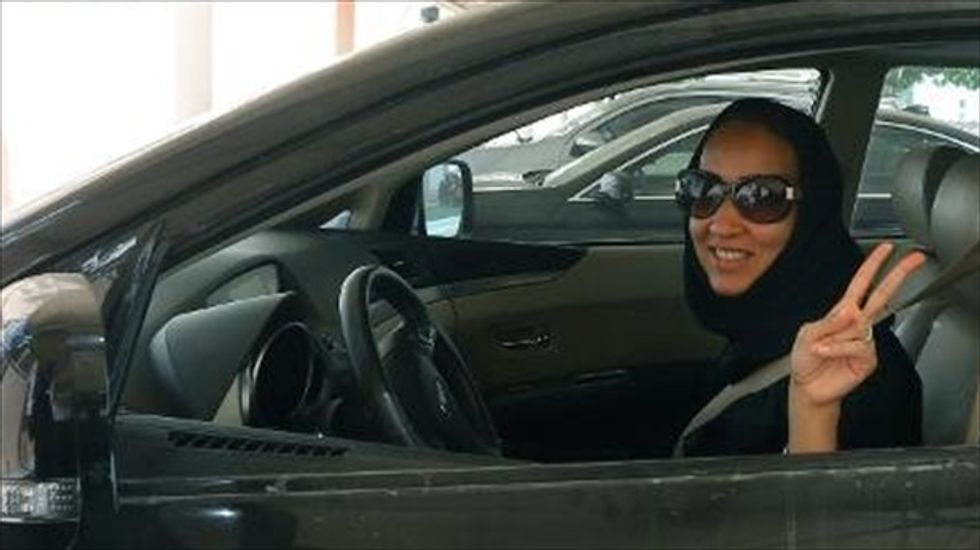 Saudi activist Manal Al Sharif, who now lives in Dubai, flashes the sign for victory as she drives her car in the Gulf Emirate city, on Oct. 22, 2013. [AFP]

US Secretary of State John Kerry said it was up to Saudi Arabia to decide when the time was right to allow women to drive.

"It's no secret that in the United States of America we embrace equality for everybody regardless of gender, race, or any other qualification," Kerry said at a press conference in Riyadh.

"But it's up to Saudi Arabia to make its own decision about its own social structure and other choices, and timing," he added.

Last week the United States said it supports the "universal rights" of women to drive in Saudi Arabia, after an October weekend protest there saw several women defy the law by taking the steering wheel.

"We support the full inclusion of women in Saudi society. People throughout the world share the same universal rights to assemble and express themselves peacefully," said State Department spokeswoman Jennifer Psaki.

"So certainly, we would support their ability to drive," Psaki said when asked about the Saudi campaign, in which women were encouraged to get behind the steering wheel on October 26 even if it meant confronting authorities.

But Kerry said after talks with Saudi leaders: "There's a healthy debate in Saudi Arabia about this issue, but I think that debate is best left to the Saudi Arabian people who are engaged in it."

He added however that everyone knew where the United States stood on this issue.

At least 16 women were stopped by police during a protest last month and were fined and forced along with their male guardians to pledge to obey the conservative-kingdom's laws.

A Saudi video mocking the kingdom's unique ban on female driving has gone viral, featuring a male performer singing "no woman, no drive", an adaptation of Bob Marley's "No Cry" hit.