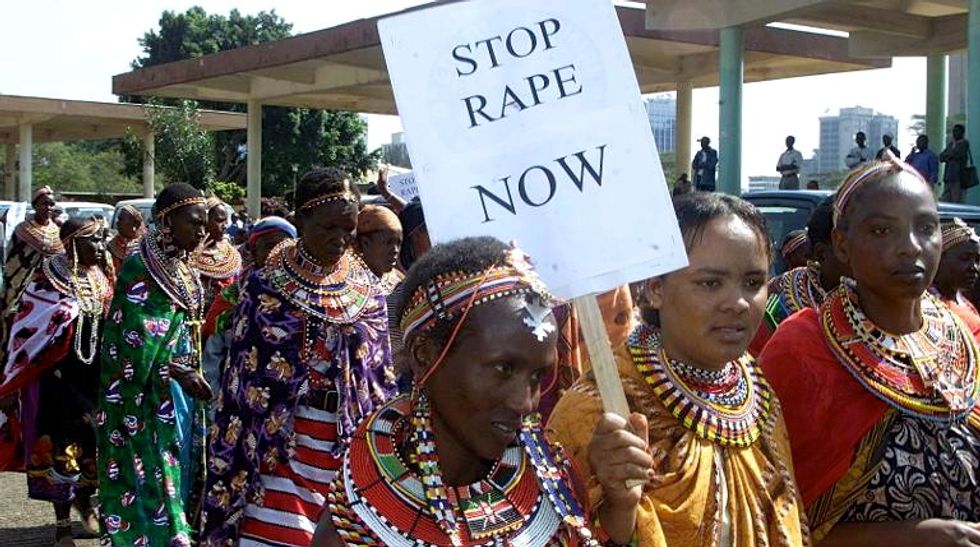 Kenya's chief justice said Saturday he had ordered "immediate action" over a case where men accused of brutally gang raping a schoolgirl were ordered to cut grass as punishment.

The ferocious attack on the teenage girl and the lack of action against those who carried it out sparked outrage in the country, while over 1.3 million people worldwide have signed a petition demanding justice.

The 16-year-old, known by the pseudonym Liz, was reportedly attacked, beaten and then raped by six men as she returned from her grandfather's funeral in western Kenya in June, before the gang dumped her, bleeding and unconscious, in a deep sewage ditch.

"I have sent the matter to the National Council for the Administration of Justice (NCAJ) for immediate action," Kenya Chief Justice Willy Mutunga said Saturday.

The NCAJ is Kenya's top-level judicial oversight body bringing together the judiciary, police, attorney-general and director of public prosecutions.

On Thursday, hundreds of protestors marched through Nairobi wearing T-shirts with the slogan "Justice for Liz" and draping dozens of pairs of women's knickers along the fence of the police station.

"Our immediate task is for the arrest and prosecution of the perpetrators, and then disciplinary action at the police who failed to take action, because we feel that they embolden others to rape," Abdulmelik said during the demonstration.

"We are using Liz's story to bring to light all the other cases of violence that are not necessarily reported to the media, to the police."

Liz has to use a wheelchair after suffering a broken back, caused either by the beating or by being hurled down into the pit. She also suffered serious internal injuries from the rape.

Her mother told the Daily Nation newspaper, which first reported the story, that three men's identified by Liz were only ordered to cut grass around the police station.

"My wish is to see justice done," Liz also told the newspaper. "I want my attackers arrested and punished."

Numbers signing the petition calling for justice continue to climb, publicised by the online campaign group Avaaz, which calls the grass cutting the "world's worst punishment for rape".

"Nobody has been brought to justice -- not the rapists, and not the police," Avaaz says in its call for people to sign the petition.

"Women's groups in Kenya say nothing will truly change unless the government is put under the global spotlight."

Rape is a major problem in Kenya. Studies say it is often not taken seriously by the police, with a devastating impact on victims.

One government study in 2009 found that as many as a fifth of women and girls were victims of sexual violence, although other studies have put the rate even higher.

Another UN-backed government study in 2010 focusing on children found a third of girls and a fifth of boys had suffered sexual violence.