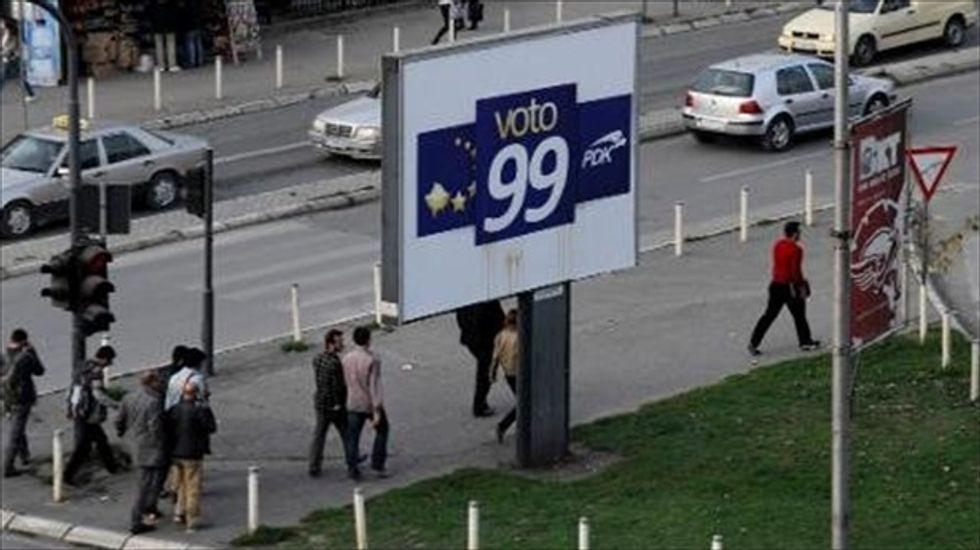 Kosovo Albanians walk past an electoral billboard on Nov. 1, 2013 in Pristina. [AFP]

Key local elections in Kosovo on Sunday will be closely watched for the turnout of its minority Serb population and is seen as a vital step in Serbia's bid to join the European Union.

Kosovo, the territory which sparked a war between Serb forces and ethnic Albanian rebels in 1998-1999, remains the main stumbling block to Serbia's bid to join the bloc.

There are some 120,000 Serbs in Kosovo. The 40,000 living in the north, which has maintained a certain control of institutions, are torn over whether to vote in the elections, backed for the first time by Belgrade.

"By taking part in the elections organised by Pristina, Serbs from the north will recognise the existence of" Kosovo as an independent country, Belgrade-based political analyst Dusan Janjic told AFP.

"This is their main dilemma since so far they have lived under Serbian institutions and do not know what life under Pristina authorities will look like," he said.

Serbia still officially rejects Kosovo's independence but has encouraged the minority Serb community to vote in Sunday's elections as part of a EU-brokered deal with Pristina to normalise their relations.

That deal in April had helped Serbia secure the green light to begin membership talks with Brussels, and holding up its end of the accord is vital if Belgrade is to push on with its bid to join the bloc.

EU foreign policy chief Catherine Ashton labelled the elections "a key moment in Kosovo's future and an important element in the process of normalisation of relations between Kosovo and Serbia".

"The EU will be following closely the conduct of the elections," she said in a statement.

Some 1.7 million across the territory are eligible to vote in the polls for deputies and mayors of 36 Kosovo municipalities.

Anxious to get the Serb community to the polls, officials from Belgrade have descended in northern Kosovo, particularly in the key town of Kosovska Mitrovica, to champion their case.

"Vote for your own good. The elections are important for your future in Kosovo," Vucic told a rally in the Serb-populated enclave of Gracanica, near Pristina.

But hardline nationalist ethnic Serbs have actively campaigned against the vote, plastering the streets of Mitrovica with posters, and blasting nationalist songs and calls for the population to boycott the polls.

Lamberto Zannier, Secretary General of the Organisation for Security and Cooperation in Europe -- which is helping to run the polls in northern Kosovo -- raised concerns about the nationalists' campaign.

"I personally continue to be concerned about uncertain security conditions on the ground and the ongoing boycott campaign in the north, which includes intimidation of candidates, voters and persons engaged in the election process," Zannier told the representatives of the OSCE member states in Vienna.

But besides dealing with pressure from nationalists, the Serb community is also being pulled the other way by Belgrade.

Several employees of Serbia-controlled institutions -- schools, hospitals and administrative offices -- have said on condition of anonymity that Belgrade is using veiled threats to get them to the polls.

"I have to vote," said Petar, a man close to retirement. "My boss and several colleagues informed me that it was a Belgrade order and that it would be monitored who cast ballots," he told AFP. "I'm too scared that I could lose my job if I did otherwise."

Miroslav, a man in his thirties, also said he had received orders from his employer to vote. "People are threatened with being fired if they do not vote," he said.

For Kosovo's Prime Minister Hashim Thaci, the elections will be a test of his decision to negotiate an agreement and improve relations with Belgrade.

The deal brokered by Brussels has been strongly criticised by the nationalist opposition in Pristina which rejects any dialogue with Serbia until it recognises Kosovo's independence.

Thaci's Democratic Party of Kosovo (PDK) is expected to win most of the ethnic Albanians' votes on Sunday.