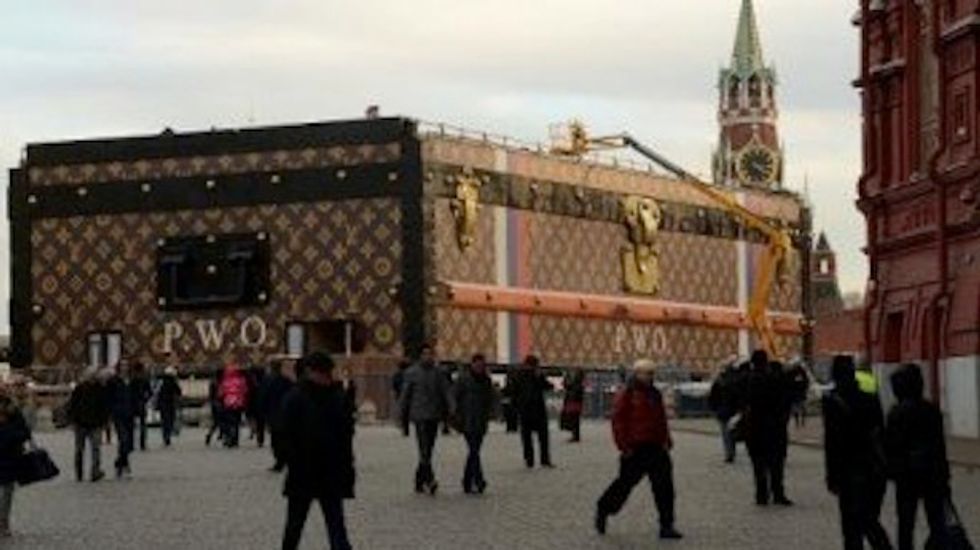 France’s Louis Vuitton has been asked to remove a giant trunk bearing the luxury brand’s iconic monogram pattern from Moscow's Red Square after it triggered a media debate and outrage among many Russians.

The structure is actually a pavilion, covered with the brand's signature brown-and-gold "LV" pattern, which was erected 10 days ago outside GUM, an upscale department store located across from the Kremlin and facing the square.

The two-story-high trunk, measuring 30 feet by 100 feet, was designed to house an exhibit on the travelers who have used LV luggage in the past.

But tourists and ordinary Russians complained the edifice was blocking views of many landmark sites, while the Communist Party was outraged by its proximity to the tomb of revolutionary leader Vladimir Lenin. Preservationists also complained, noting that Red Square is a UNESCO World Heritage Site.

"It's ugly on Red Square," said one Muscovite. "The trunk hides too much, you can't see anything."

Following several days of media debate, the GUM store said Wednesday that it had asked Louis Vuitton to take down the pavilion.

"Considering the view of some of the public, and the fact that the pavilion's size had surpassed the agreed parameters, we told Louis Vuitton about the need to immediately dismantle the pavilion," GUM said on its website.

Moscow City Hall officials told the Interfax news agency that organizers were preparing to dismantle the installation, with the head of the advertising department, Vladimir Chernikov, calling it a "mistake".

But a Louis Vuitton spokesman in Paris said that they "haven't received any official orders to take down" the giant trunk.

Kremlin ‘had nothing to do with it’

Red Square is under the official jurisdiction of the Kremlin, but a Kremlin source told Russian news agencies that the structure was "not agreed with the presidential administration".

The Kremlin's Office of Presidential Affairs, which oversees the square, also said it not given permission for the construction.

"The GUM [store] dealt with the permission issues. We had nothing to do with it," spokesman Viktor Khrekov told AFP by telephone.

As the location of both the Lenin Mausoleum and the Christ the Saviour Cathedral, Red Square is by far the most heavily policed spot in Russia.

After its planned opening on December 2, the proceeds from the Louis Vuitton exhibit were destined for the "Naked Hearts" children's foundation of Russian supermodel Natalia Vodianova, who invited the public to attend the "unique event" in a promotional video.

Vodianova is in a relationship with Antoine Arnault, the son of Bernard Arnault, who is the chief executive of the LVMH group that owns the Louis Vuitton brand.

Some viewed the giant branded trunk as a symbol of modern Russia, where corruption has made anything possible and nobody is held accountable.

Late on Wednesday workers were already putting up posters on the fence around the trunk, warning people that it was slated to be dismantled.

A few Russians, however, said they did not mind the installation because it added a quirky and artistic element to an otherwise gloomy location.