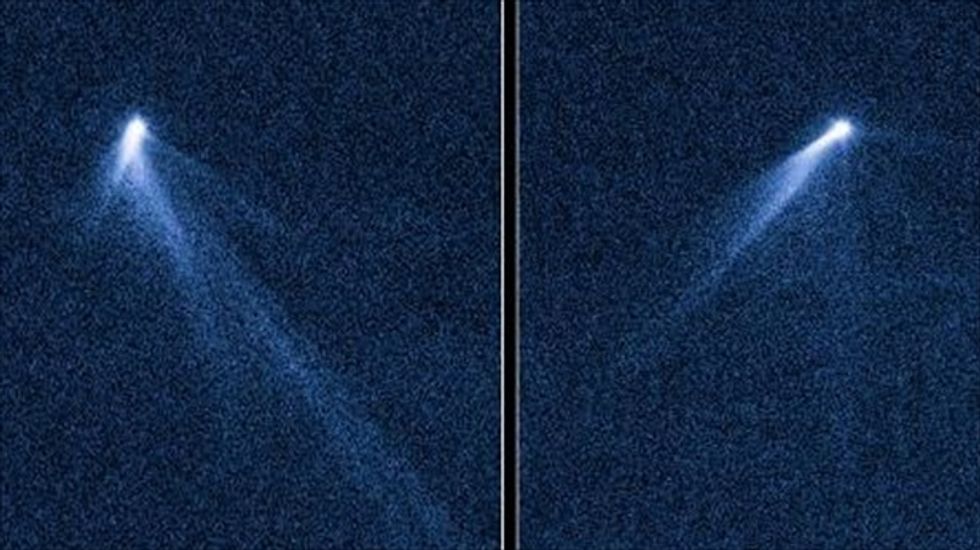 A strange asteroid that appears to have multiple rotating tails has been spotted with NASA's Hubble telescope between Mars and Jupiter, astronomers said Thursday.

Instead of appearing as a small point of light, like most asteroids, this one has half a dozen comet-like dust tails radiating out like spokes on a wheel, said the report in Astrophysical Journal Letters.

"It's hard to believe we're looking at an asteroid," said lead investigator David Jewitt, a professor in the University of California Los Angeles Department of Earth and Space Sciences.

"We were dumbfounded when we saw it. Amazingly, its tail structures change dramatically in just 13 days as it belches out dust."

The object has been named P/2013 P5, and astronomers believe it has been spewing dust for at least five months.

The asteroid may have started spinning so fast that it began to disintegrate, scientists say.

They don't think the tails are a result of an impact, because that would cause dust to spray out all at once.

Its multiple tails were discovered in images taken by NASA?s Hubble Space Telescope on September 10, 2013, after first being spotted with a telescope in Hawaii.

Jewitt said the object may have come from an asteroid collision some 200 million years ago. Its pattern of dispersing dust in fits and bursts may be how it slowly dies.

"In astronomy, where you find one, you eventually find a whole bunch more," he said. "This is an amazing object and almost certainly the first of many more to come."

As the Federal Reserve signals it will raise interest rates in March, we talk to Christopher Leonard, author of the new book “The Lords of Easy Money,” about how the Federal Reserve broke the American economy. He details the issues with quantitative easing, a radical intervention instituted by the federal government in 2010 to encourage banks and investors to lend more risky debt to combat the recession. “The Fed’s policies over the last decades have stoked the world of Wall Street,” says Leonard. “It has pumped trillions of dollars into the banking system and thereby inflated these markets for stocks, for bonds. And that drives income inequality.”

A crowd in a House committee meeting Thursday evening chanted loudly, “Let us speak; let us speak,” when the chairman announced that the committee would soon end the public testimony on a proposed 15-week abortion ban.

The last speaker, a woman from Tampa Bay, began to make her remarks, and the chanting in the crowd began. The woman was then escorted out of the committee room by House security.

A Pennsylvania appeals court has struck down the commonwealth’s landmark 2019 mail-in voting law, though the near certainty of an appeal means voters might not notice a difference until the Supreme Court weighs in.

In a 49-page opinion issued by Judge Mary Hannah Leavitt on Friday morning, a five member panel of the court found 3-2 that the law, which allows all Pennsylvanians to vote by mail without an excuse, was unconstitutionally enacted as a statute, rather than being approved through the state’s long and rigorous constitutional amendment process.