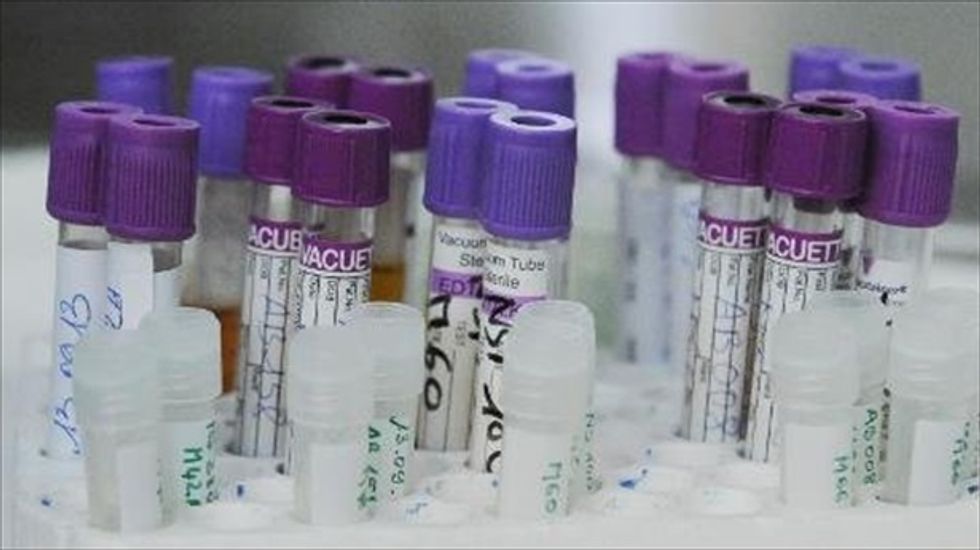 A view of blood samples of people living with HIV in a laboratory at the AIDS Research Center of the Treichville hospital in Abidjan, Ivory Coast [AFP]

The new strain of the virus that causes AIDS, called A3/02, is a fusion of the two most common HIV strains in Guinea-Bissau. It has so far only been found in West Africa.

"Individuals who are infected with the new recombinant form develop AIDS within five years, and that's about two to two-and-a-half years faster than one of the parent (strains)," said Angelica Palm, one of the scientists responsible for the study based on a long-term follow-up of HIV-positive people in Guinea-Bissau.

Recombinant virus strains originate when a person is infected by two different strains, whose DNA fuse to create a new form.

"There have been some studies that indicate that whenever there is a so-called recombinant, it seems to be more competent or aggressive than the parental strains," said Palm of the study published in the Journal of Infectious Diseases.

The strain was first discovered by the Swedish team in Guinea-Bissau in 2011.

According to researchers, the speed with which A3/02 leads to people falling ill from AIDS does not impact on the effectiveness of medication on infected individuals.

"The good news is that as far as we know the medicines that are available today are equally functional on all different subtypes of variants," Palm said.

The study warns that such recombinants may be spreading fast, especially in regions with high levels of immigration, such as Europe or the United States.

"It is highly likely that there are a large number of circulating recombinants of which we know little or nothing," said Patrik Medstrand, professor of clinical virology at Lund University.

Some 35.3 million people around the world are living with HIV, which destroys the immune system and has caused more than 25 million deaths since AIDS first emerged in the early 1980s, according to the World Health Organisation.

Existing treatments help infected people live longer, healthier lives by delaying and subduing symptoms, but do not cure AIDS. Many people in poor communities do not have access to the life-giving drugs, and there is no vaccine.