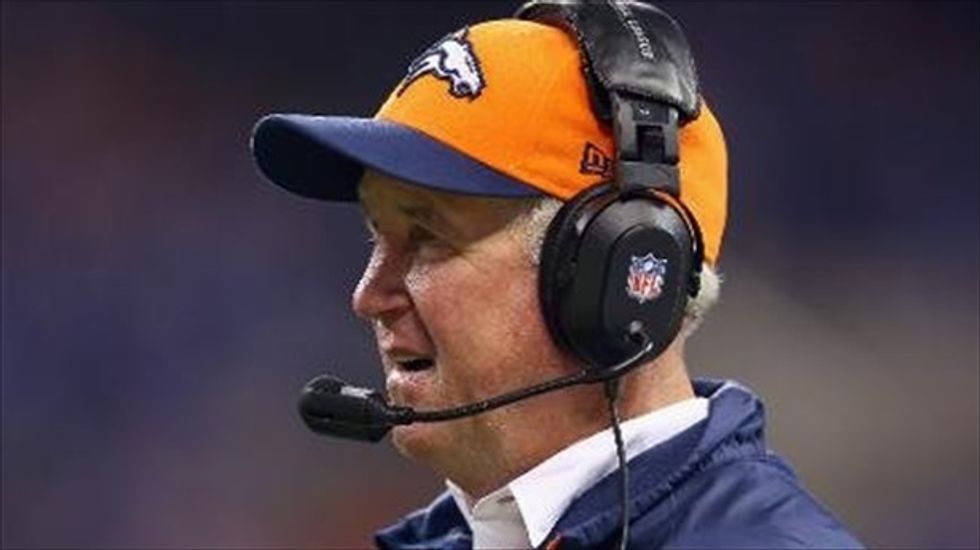 John Fox, head coach of the Denver Broncos, gives instructions to his team during the game against the Indianapolis Colts at Lucas Oil Stadium on Oct. 20, 2013. [AFP]

Stress upon National Football League coaches became the major topic in American sports after two of them collapsed last weekend, one undergoing heart surgery on Monday and the other still in hospital.

Denver Broncos coach John Fox underwent aortic valve surgery after collapsing on Saturday on a golf course as his team was enjoying a week off while Houston Texans coach Gary Kubiak will be hospitalised until at least Tuesday while undergoing tests after collapsing at halftime of his team's home loss Sunday night to Indianapolis.

"I wouldn't call it a wake-up call. It was a shock to see it happen," said Broncos interim coach Jack Del Rio, the defensive coordinator who was named on Monday as Fox's temporary replacement.

"You tend to put yourself at the back of the list of priorities (as a coach). We're all human beings. The fact they both happened on the same weekend will draw a lot of attention to it I'm sure. Coaches are people too. It's just a slice of life."

Former NFL star quarterback John Elway, the Broncos vice president of football operations whose father was a gridiron coach, knows all too well that the job tends to come ahead of personal health issues.

"I wish (my dad) had taken better care of himself. But that's the mentality. It's all about the football team."

And coaches are on the firing line for failure far easier than top players with millions of dollars riding on the outcomes for owners.

"When you look at the pressure in this game, there is a lot of pressure on head coaches," Elway said. "In the evolution of this game, the expectation levels have continued to grow. That's a tough, tough spot."

Fox, 58, has worked for seven NFL teams since his first assistant coaching job in the league in 1989.

Kubiak, 52, has guided the Texans for seven years after spending the prior 11 years as the Broncos offensive coordinator. It is not known what caused his collapse.

"Gary is alert, coherent and in good spirits. He is continuing to be evaluated and monitored," Texans general manager Rick Smith said.

Kubiak was dizzy and light-headed as he began walking off the field at half-time with the Texans ahead 21-3. Without signal-caller Kubiak in the second-half, the Texans struggled and lost 27-24 to the Colts.

The Broncos knew Fox was to have the operation after the season. But when he collapsed two days after visiting a doctor in North Carolina, the timetable for surgery was moved forward.

"The concern is going to be with John's health not only for this season but for the rest of his life," Elway said.

"Things went well but we have to see with the doctors. Now that he is in recovery we will have a better idea of what he is able to do. He was in good spritis. He was ready to face this head on."

Del Rio will still decide defensive formations but will now be in touch with the offensive unit, led by star quarterback Peyton Manning.

Fox will stay engaged with the staff by telephone, but to what extent has yet to be determined.

"He needs the time now to take care of himself. I'm glad he was able to handle this in advance of something worse happening," Del Rio said.