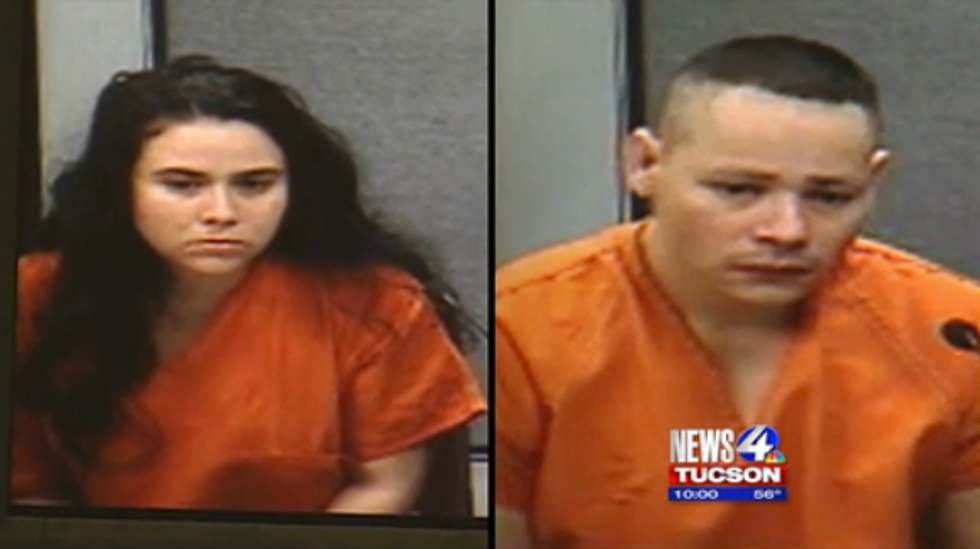 Police in Arizona are investigating a "house of horrors" where three teenage girls were imprisoned for two years and abused by their mother and stepfather.

The three girls, aged 17, 13 and 12, were locked in their bedrooms, subjected to torture and fed only once a day. Described as malnourished and “extremely filthy” by police, they had not taken a bath for around four to six months, they told officers. They were forced to listen to intolerably loud music or white noise and were only allowed to go to the toilet if they had permission, which was not always granted. In order not to raise suspicion, their bedrooms and the whole house had been sound-proofed.

The girls escaped the house when the 12- and 13-year-old broke out of their bedroom window early on Tuesday morning and ran to a neighbour’s home.

“We heard our doorbell ringing wildly and frantically and heard somebody knocking on our windows,” one of the neighbours, who gave her name as Alice, told NBC news.

The girls, who Alice described as “distraught and hysterical”, said they had run away from home because their stepfather had kicked in their bedroom door and was trying to assault them with a knife.

Alice, who had no idea children had been living next door, took the girls in and called the police.

When police entered the house they discovered a third sister, who had not been aware of the officers' arrival because of the loud music.

“[When law enforcement officers entered the house they] discovered yet a third female, who was also imprisoned within her bedroom, a different bedroom than the one her siblings were occupying together,” Mike Gillooly, a captain with the Tucson police department, told reporters on Tuesday.

Stepfather Fernando Richter, 34, and mother, Sophia Richter, 32, were arrested and have been charged with multiple counts of emotional and physical child abuse and kidnapping. The stepfather is also charged with one count of sexual abuse of one of the younger girls.

Police are combing through 18 months of diary entries written by the eldest victim as they build up a criminal case against the couple.

"It did contain a lot of information that I feel will be useful in helping us to determine the method and length of the imprisonment," Tucson Police Chief Roberto Villasenor told a news conference on Wednesday.

The 17-year-old also kept a photograph of American pop singer Enrique Iglesias, which she considered a “prized possession”, Villasenor said.

The house, which is set back from the road, was fitted with an elaborate alarm system on both interior and exterior doors, and both of the bedrooms were fitted with 24-hour surveillance systems, he said. It was not clear whether video footage had been streamed outside the home.

"The girls' movements were strictly controlled,” Villasenor said, “When, where and how they went to the bathroom, when they were fed. The children had a pre-arranged signal if they wanted to use the bathroom,” he explained, but declined to go into details.

The couple, who have been together for around 10 years and married for three or four, were often heard arguing loudly, one local resident told NBC.

Both fathers of the girls had been told by their mother they were living in California. Their maternal aunt, Chame Buneo, told AP news agency that her sister wouldn't let her speak to her nieces – who she also believed to be in California – on the phone.

"She always talked him up, 'Oh well he pays for all my kids' clothes and he takes them here and he takes them to eat and do this' — and all that time being locked up in a room," Bueno told AP. “He hasn't done nothing she said. She has just been lying.”

The mother told police officers that her daughters, the youngest of which she gave birth to when she was 15 years of age, were home-schooled.

Investigators had found no record of the girls at any schools in the area, Villasenor said.

The girls have been reunited and are in the care of social services.

More charges are expected against the Richters, who are currently in jail, Villasenor stated.