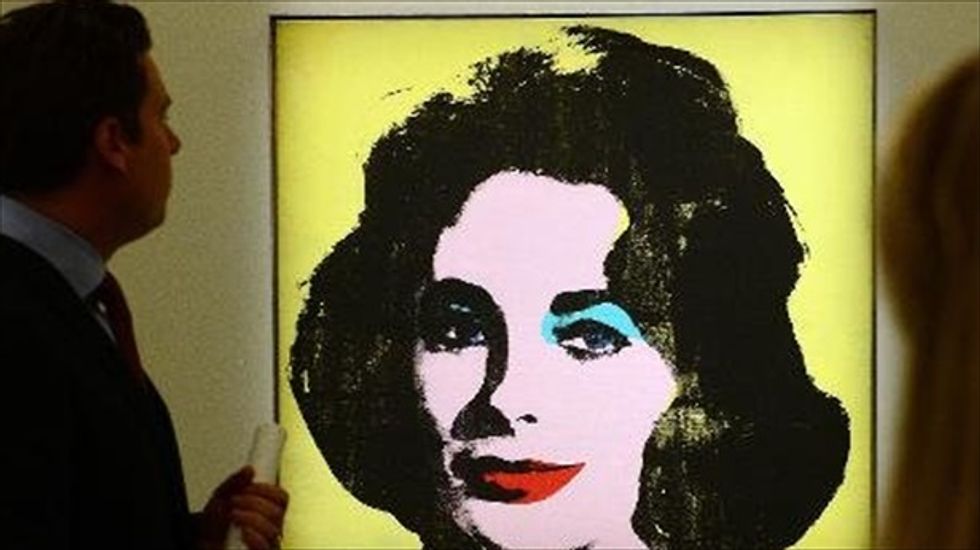 'Liz #1 (Early Colored Liz)' by Andy Warhol is on display during a press preview of Sotheby's auction of contemporary art, at Sotheby's in New York. [AFP]

Some of the finest masterpieces of 20th century art are the highlights of New York's November auction season, poised to set new sales records in a flourishing market.

The sum total of impressionist, modern, post-war and contemporary art being offered by Christie's and Sotheby's is expected to fetch more than $1.5 billion at combined evening and day sales from November 4 to 13.

Both auction houses are chasing world records for a string of artists, riding high on an explosion in art sales fueled by new buyers from emerging markets.

Despite glorious stand-out works from Pablo Picasso and Swiss artist Alberto Giacometti, the big bucks this year are in the post-war and contemporary categories.

Paintings by Andy Warhol, the most beloved of US post-war artists, dominates Christie's and Sotheby's evening sales on November 12 and 13 respectively.

But the most expensive single lot under the hammer is likely to be "Three Studies of Lucian Freud" by 20th century British figurative painter Francis Bacon.

Christie's expects it to break the previous record of $86 million for a Bacon painting in 2008.

The auction house describes it as "an icon of 20th century art" and a "once in a lifetime" opportunity to acquire having never been under the hammer previously.

Another highlight is the orange -- one of five colored giant "Balloon Dogs" by Jeff Koons -- which Christie's expects to go for $35-$55 million and make history for the sale of a work by a living artist.

US rock legend Eric Clapton is among the collectors selling this season -- an abstract by Germany's Gerhard Richter estimated at around $20 million.

Christie's and Sotheby's, both founded in London in the 18th century, still dominate the art market although Christie's volume of sales is now much larger.

Brett Gorvy, head of post-war and contemporary art at Christie's, said sales had been revolutionized by new collectors looking for the best.

A wealth of billionaires from Asia, China, the Gulf, Latin America and Russia were injecting huge cash into a New York market where Americans have long dominated.

"These are people who want to put together major, major holdings of art because they're responding to the art and they're learing incredibly quickly," he added.

With impressionist and modern art harder to come by and many of the great works in museums, it is contemporary work that has seen such a dramatic rise in prices.

But David Norman, co-chairman of impressionist and modern art at Sotheby's, was optimistic about the risks.

"In my 30 years here, it is cyclical, and I have no doubt that some point the total values of the sales might diminish," he told AFP.

"But as great works just keep diminishing even in the hardest of times when we get a masterwork that comes up for sale, it still makes a record price," he added.

Of impressionist and modern art under the hammer, two Giacomettis are the most expensive.

Sotheby's offers a bronze bust of his brother Diego, for $35-$50 million, which Norman describes as "one of two or three of his best sculptures".

Christie's is offering a portrait of Diego for $30-$50 million, which has been in a private collection for two decades and has never before been up at auction.

Among the Picassos is a 1935 portrait of his muse and mistress, Marie-Therese Walter, who was pregnant at the time, estimated at $20-$30 million by Sotheby's.

Christie's most expensive Picasso is his "Tete (Maquette pour la sculpture en plein air)" made for Chicago's Civic Center in 1962-64 at $25-$35 million.