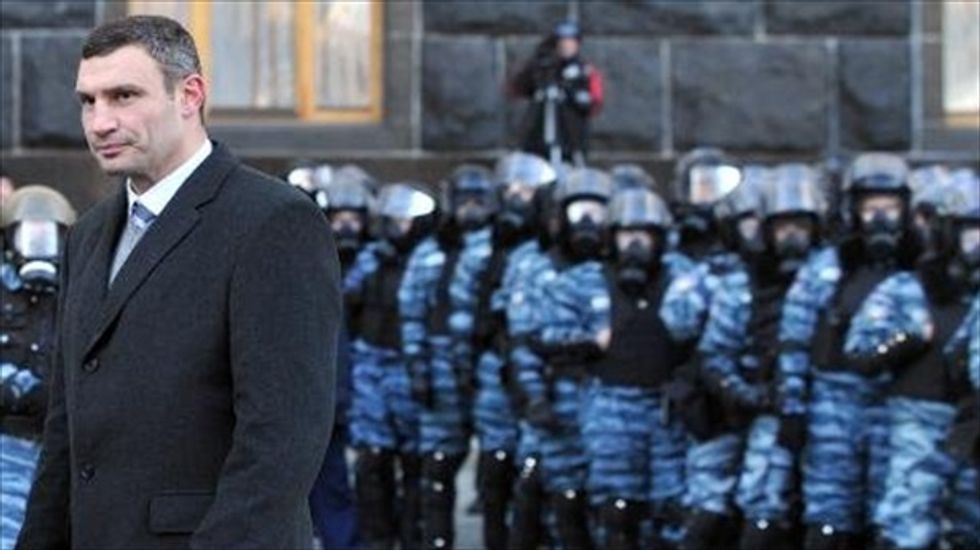 World boxing champion and leader of the Ukrainian UDAR (Punch) opposition party Vitali Klitschko (L) stands in front of riot police during a rally of opposition supporters in front of government headquarters on Nov. 27, 2013 [AFP]

Ukraine said Wednesday it still wanted to reach a historic deal on closer ties with the European Union, as mass protests over a move to scrap the pact went into a fourth day.

Last week the government abruptly announced it would not sign the accord, seen as a key step toward Ukraine's EU membership, sparking the biggest rallies since the pro-democracy Orange Revolution in 2004.

Brussels has accused Moscow of pressuring its neighbour, which is heavily dependent on Russia's natural gas, to put the deal on ice.

Azarov told a government meeting that Ukraine fully intended to forge closer relations with the EU.

"I affirm with full authority that the negotiating process over the Association Agreement is continuing, and the work on moving our country closer to European standards is not stopping for a single day," he said.

Ukrainian President Viktor Yanukovych, who is planning to attend the summit in Vilnius, said in a televised interview Tuesday that his government wanted better terms from the EU.

Opposition politicians Arseniy Yatsenyuk, Vitali Klitschko, and Oleg Tyagnybok, who have participated in the ongoing protests, also flew out to Vilnius for the talks Wednesday evening, the party Batkyvschina said.

Kiev has complained that the EU was offering insufficient compensation for the damages it would suffer by diluting its tight economic ties with Russia.

"As soon as we reach a level that is comfortable for us, when it meets our interests, when we agree on normal terms, then we will be talking about signing," Yanukovych said Tuesday.

On Wednesday, current EU chair Lithuania reiterated that the bloc was ready to sign the deal.

"If Ukraine says 'yes, we want this,' we will meet to discuss what to do. We are ready to hold the necessary meetings in Vilnius," Foreign Minister Linas Linkevicius told reporters in Lithuania.

Led by opposition leaders, nearly a thousand protesters rallied outside the government building for a fourth day Wednesday under a heavy police presence.

"These authorities have to step down," world boxing champion turned opposition leader Klitschko said to loud cries of "Shame!"

Jailed opposition leader Yulia Tymoshenko, who is on hunger strike in solidarity with the protesters, called on them to close ranks across party divides.

"Everything that stands in the way of our absolute unity, should be immediately taken down," she was quoted as saying by her daughter Yevgenia late Tuesday.

Following the appeal of the fiery former prime minister, demonstrators removed their tents from central Kiev's European Square and joined civil society activists on neighbouring Independence Square, the symbol of the Orange Revolution.

Around 7,000 had gathered in central Kiev by Wednesday evening. In the western city of Lviv, about 15,000 rallied, along with several thousand in the nearby city of Ivano-Frankivsk.

Yanukovych has called for calm after the protests turned violent over the past few days, with riot police firing tear gas and protesters hurling traffic cones and rocks at the security forces.

The debate over Ukraine's future has turned into a heated diplomatic tussle between EU leaders and Putin's Kremlin.

Ukraine's historic master Russia wants it to join a Moscow-led Customs Union that President Vladimir Putin sees as a future alternative to the European Union and already includes the ex-Soviet states of Belarus and Kazakhstan.

Top EU officials have said they "strongly disapprove" of Russian pressure on Kiev.

Putin responded on Tuesday by advising "our friends in Brussels, my personal good friends in the European Commission, to hold back on the sharp words".

The Ukrainian government's decision to scrap the EU pact has brought masses to the streets, with tens of thousands of protesters gathering in the capital on Sunday and up to 20,000 on Monday.

Kiev's move came after parliament failed to adopt legislation that would have freed Tymoshenko, a top EU condition for the deal.

Shortly after she lost to Yanukovych in a 2010 election, she was sentenced to seven years on abuse of power charges.